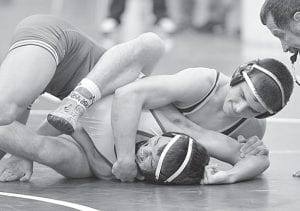 Archbold wrestlers traveled to Patrick Henry, Thursday, Dec. 13, where they faced off against the host Patriots and Delta in Northwest Ohio Athletic League action.

In the opening match against PH, Archbold jumped out to a big lead and coasted to an easy victory.

The Streaks recorded the first four victories to start the match. Logan Day (145 pounds) started the scoring with a 13-3 major decision, followed by a forfeit win by Koltin Zimmerman (152 lbs.), a 5-2 decision by freshman Garrett Grime (160 lbs.), and a fall by Jacob Wagner (170 lbs.).

PH received two forfeit victories at heavyweight and 106 lbs., but that was all the scoring the Pats could muster.

Against Delta, the roles were reversed as the Panthers jumped out to a 27-0 lead en route to the 42-34 win.

The Streaks scored on pins by Eggers, Jaramillo and Lee Klinger (285 lbs.).

Price recorded a 14-2 major decision, with the remaining points scored on forfeit wins by Meyer and Justice Zimmerman (145 lbs.).

“We came out flat,” said Brian Becher, AHS head coach. “I don’t know if that was due to our practice yesterday, if we weren’t controlling our weight, whatever it may be.

“We need to find out why some of our guys were flat, but we need to get it fixed.

Delta “wrestled a lot more physical than us. I thought from the neutral position they moved us better, and on the bottom, they were exploding out. When we were down, we were not able to do the same.

“It seemed like their good guys controlled all three positions against our better guys. We thought Logan (Day) would be able to wrestle with (Tyler) Fahrer.

Fahrer is a returning state runner-up.

“I think he (Day) came out a bit flat, and when our kids see one of our best guys get pinned, it kind of deflates your sail a bit,” said Becher.

“We’ve got to get a lot better in a hurry if we are going to compete with teams like this.

“Our biggest thing right now is staying physical. High school guys (tend to) back down if you get guys out there beating them up.

“If we start doing that, then we can compete with most of the teams in the area.”