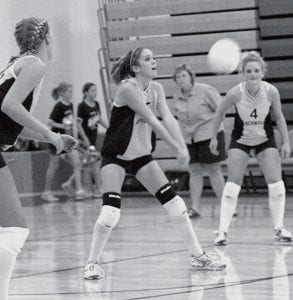 The Archbold volleyball team finished a busy week by going 4-0, upping its record to 8-0, 4-0 in the Northwest Ohio Athletic League.

Archbold jumped out to an 11-3 lead when Bryan called a time-out.

Defensive specialist Laura Wyse had a nice up, keeping the ball in play in a long rally, but the point went to Bryan, 17-9.

The second game went back and forth at the start, and was tied at 4. Dani Newman broke it with an ace for a 5-4 lead.

The score was tied again at 12 when Dani Newman spiked the ball for a 13-12 lead.

The Newman sisters finished out game two. Dani Newman scored two kills to up the score to 24-19. Devin Newman then had a kill to win the second game 25-19.

The Streaks scored six points in the third game before Bryan scored one. Later, Devin Newman and Stacy Wyse teamed up for a block at 19-7.

Lauren Kern’s serve hit the tip of the net and went over, good for a point and an ace at 21-8.

Dani Newman’s spike upped the advantage to 24-9. Snyder put down the ball at game point, winning the match 25-10.

Dani Newman led the Streaks in attacks, putting down 11 balls out of the 30 total kills in the game.

She and Adi Lange led the Streaks in digs, with 16 and 15, respectively.

Archbold setters were perfect. S. Wyse led them with the most sets connected to kills; she was 89/89 in total sets.

Archbold played hard for 45 minutes to finish off Fairview. AHS was 46/51 in serving. Kern led the Blue Streaks in digs, getting in position for eight Fairview hits. As a team, there were 35 digs.

In Archbold’s second match on Saturday, Napoleon proved to be a slightly harder challenge, but the Streaks were successful.

Blue and Gold setters were perfect once again, setting 72/72.

The Newman sisters, Snyder, and Lange showed their strength in this game as well, leading the team in kills. Dani Newman had seven; Lange, six; Snyder and Devin Newman, five each. There were a total of 26 kills.