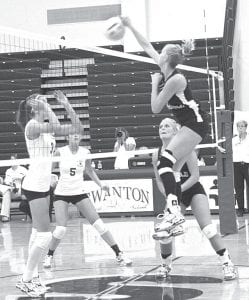 Emily Snyder hammers a kill in Archbold’s NWOAL volleyball match at Swanton, Thursday, Sept. 10. The Blue Streak senior had 11 kills in the victory.–photo by Mary Huber

The match lasted only 55 minutes as Swanton had no answer for the spiking power of Emily Snyder, Alyssa Schaub, and Devin Newman and the setting of Stacy Wyse.

In the second game, AHS had a slim 11-8 lead when Newman stepped up to serve. Several Streak kills and Swanton mistakes later, the Blue and Gold were at game point, 24-9, when the Bulldogs finally got a side out. However, their serve went into the net, and AHS won 25- 9.

Archbold had control of the Bulldogs’ leash and didn’t let go in game three. The Streaks led 13-8 when Newman again was up to serve, and by the time Swanton got a side out AHS led 20-9. Archbold won the third game 25-11.

Newman was 28/28 in serving with four aces, and had nine digs. Jenna Nofziger was 8/8 in serving.

With the win, Archbold remains undefeated at 4-0, 2-0 NWOAL.