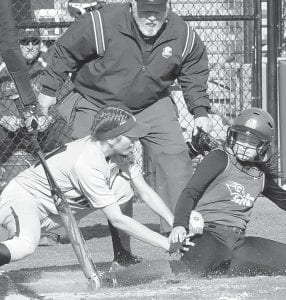 A Tinora runner is tagged out at home plate by Archbold pitcher Alyssa Ziegler, Friday, April 1. The Streaks lost to the Rams 8- 2.– photo by Mario Gomez

The Archbold softball team started the season with a non-league win over Otsego while dropping a pair of non-league encounters with Maumee and Tinora.

All of the scoring took place in the first two innings as Archbold took a 1-0 lead in the top of the first inning at Maumee, Tuesday, March 29.

After Brooke Hines led off with a bunt single, Alyssa Ziegler also bunted and was safe when the first baseman dropped the ball tagging her.

Madison Kohler walked to load the bases and Hines scored on a groundout by Shelby Cline.

Maumee answered with all three of its runs in the bottom of the inning, collecting two singles and a double.

Archbold answered with a run in the second, but that was it for the scoring.

The Streaks defeated the Knights 12-1, Wednesday, March 30, in a contest that lasted six innings at Otsego.

Archbold collected 10 hits, led by freshman Andi Peterson, who went 2-4 with a double and a two-run home run while driving in four runs.

Ziegler, Neila Kinsman and Cline also had two hits each.

Ziegler was dominant on the mound as she gave up only one run on two hits while striking out six and walking two.

The Streaks played solid defense as they committed only one error.

The Streaks finished the week by hosting Tinora, Friday, April 1, and came out on the short end of an 8-2 decision. The contest was tied at 1 before the Rams erupted for four runs in the fifth and three more in the seventh.

Macey Rupp led the way at the plate, going 2-2 with a walk and a double. Ziegler also had two hits while driving in both runs.

Ziegler was the losing pitcher, giving up eight runs on 12 hits while striking out eight and walking four.

“Overall it was a disappointing start to the season, but I am confident this team will get things turned around,” said Joe Frank, AHS head coach.

“It may take some time for us to get people plugged into positions, but eventually we will get things settled.

“We were very inconsistent at the plate this week and struck out too much. We need to be more aggressive at the plate and not watch so many good pitches go by.

“If I were to use one word to describe the week, it would be inconsistent. We were not consistent in any one area of the game, and we will need to improve in all areas.

“We aren’t going to push the panic button, but at the same time, we will continue to search for the lineup that gives us the best chance to compete in all of our games.”