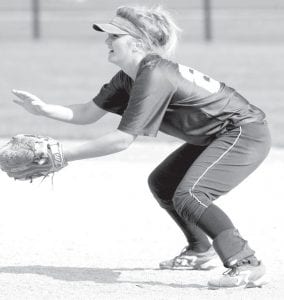 The Archbold softball team (20-4) swept two contests last week, including a league contest against Swanton, to claim at least a share of its fifth straight Northwest Ohio Athletic League title.

The Streaks, who cracked the Top 10 in the Ohio High School Softball Coaches Association poll last week, also beat a good Sylvania Southview squad to improve to 20- 4 on the season.

The Cougars scored once in the top of the first inning before the Streaks scored two runs in their half to take the lead for good.

Alyssa Schaub tied the game in the bottom of the first with a home run, and Stacy Wyse drove in the lead run after Morgan Ducey doubled.

Ducey led the way at the plate with a double and a single.

Lex Campos pitched the first six innings and gave up one run on four hits while striking out five and walking none. Sarah Wyse pitched a perfect seventh to close out the game.

The Streaks jumped out to a commanding 7-0 lead in the first inning and later played some long ball to put the game away.

Archbold collected six hits in the first inning and hit three homers in the fifth and sixth. Stacy Wyse, Courtney Day, and Morgan Cody all homered.

Day led the way at the plate, going 3-4 with a double, triple, and home run.

Sarah Wyse pitched the first five innings and gave up two runs on two hits while striking out 10 and walking two. Campos pitched a scoreless sixth.

“It was a good week for us,” said Joe Frank, AHS head coach. “We beat a quality opponent in Southview and then took care of business against Swanton.

“Both Lex and Sarah pitched well for us and we played good, solid defense behind them. We also hit the ball well, and that took a lot of pressure off the pitchers.

“We still have our primary goals in front of us and have a lot to play for in the next week.”

The Streaks play for a Division III sectional title, Friday, May 14, 5 p.m., at AHS.

Archbold plays the winner of the Liberty Center- Swanton semifinal that was rescheduled for tomorrow night, Thursday, 5 p.m.

The winner plays in a district semifinal against the Fort Recovery-Coldwater sectional winner at Lima Bath High School, Wednesday, May 19, 5:30 p.m.

The Tinora-Delta sectional semifinal has also been rescheduled for tomorrow, Thursday, at 5 p.m. The winner plays Evergreen in a sectinal final, Friday, May 14, 5 p.m.