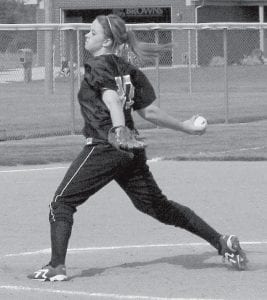 Sarah Wyse picked up her fourth victory in as many starts when the Streaks beat Fairview 12-1 in the Division III district final. She also pitched AHS to a 2-1 district semifinal victory over Evergreen.- photo by Mary Huber

Archbold won a district softball championship for the 23rd time in school history, Thursday, May 22.

The Streaks defeated Fairview 12-1 in the Division III district final at Lima Bath High School. It was the second time AHS beat Fairview this season.

AHS avenged a regular-season loss to Evergreen with a 2-1 district semifinal victory at Archbold, Tuesday, May 20.

Andrea Allan opened the game with an infield single and moved up a base on a sacrifice bunt by Adi Lange. Allan advanced to third on a wild pitch and eventually scored on another wild pitch.

The Streaks added to the lead in the second inning. Morgan Ducey singled and Jenna Nofziger, the courtesy runner for Ducey, advanced to second on a wild pitch.

Nofziger scored on successive groundouts by Dani Newman and Laura Wyse to up the score to 2-0.

The Streaks collected three hits in the third, but Lange was cut down at the plate on a great throw by Evergreen center fielder Ashley Herr to prevent another run. 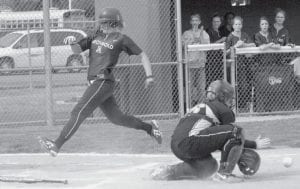 Stacy Wyse crosses the plate on a Dani Newman pop-up in Archbold’s 12-1 district championship victory over Fairview. Wyse hit a long two-run homer over the center field fence in the fifth inning.- photo by Mary Huber

The Vikes finally broke through in the fourth inning against Archbold pitcher Sarah Wyse. Two singles, a line drive out, and a walk loaded the bases.

Wyse struck out Makenzie Pinkelman for the second out, but an error allowed the Vikes to score and cut the difference to 2-1.

Wyse prevented any further damage by getting the third out on a fly ball to Alyssa Schaub in right field.

In the Viking half of the fifth, Taylor Langenderfer led off with a single, and with two outs was on third base.

Devin Newman made the defensive play of the game for the Streaks as she robbed Pinkelman of a hit and prevented the tying run from scoring.

The last Viking threat came in the seventh with two outs. Megan Schwyn singled and advanced to second when the pitch to Herr squirted away from Ducey. Ducey’s throw to second base, which was attempting to get Schwyn out, got by Wyse.

But Lange was backing up the play and easily threw out Schwyn at third to end the game.

Seven Streaks collected hits while the Vikes collected only five hits off Sarah Wyse, a freshman. She struck out nine and walked only three in the complete-game victory.

“This was a tremendous high school softball game, and I am proud of the way we played today,” said Joe Frank, AHS coach. “We didn’t play a per- fect game, but we competed the entire game and didn’t back down from Evergreen.

“We hit the ball so well against Pinkelman, after really struggling against her the first time we played them. We came in and did some extra hitting and were prepared for what she threw against us.

“We didn’t have an answer for Natter when she came in, but I believe most of the credit goes to her for making great pitches.

“What can you say about Sarah Wyse? Lauren (Kern) went down with a knee injury, and Lex (Campos) also had some tenderness in her pitching arm, so we went with Sarah. She pitched tremendously in a high-pressure game.

“She may have had some nervousness, but it sure didn’t show in the way she pitched today. It was just a tremendous team win.”

Archbold captured the district championship with a fiveinning win over Fairview.

Archbold jumped out to a 3-0 lead in the first inning. Singles by Allan and Lange started the inning. With one out, an Apache error led to the bases being loaded.

Abbey Graber hit a grounder to second base, but the throw to home was too late to get a hustling Allan, and the Streaks led 1-0.

A bases-loaded walk to Ducey led to another run, and Dani Newman drove in the third run with a sacrifice fly to left field.

The Streaks added another run in the fourth when Laura Wyse singled and eventually scored on a Lange single.

Fairview cut the margin to 4-1 in the fourth inning. A single, walk, and a single gave the Apaches the run and put runners on second and third base with two outs. Sarah Wyse prevented any further damage by striking out Scantlen to end the inning.

AHS broke the game open with a huge eight-run fifth inning. The inning was highlighted by Allan’s single, which drove in two runs, and Stacy Wyse’s long two-run home run over the center field fence.

Leading the way offensively was Allan, who went 3/4 with two runs batted in. L. Wyse had two hits, as did Lange and Stacy Wyse. The Streaks totaled 12 in the contest.

Sarah Wyse pitched the complete game victory and gave up five hits while striking out seven and walking two. AHS played flawless defense behind Wyse, another key to the game.

“I certainly didn’t expect this type of game today, I can tell you that,” said Frank. “We just came out and completely took charge in the first inning, and I think that set the tone for the game.

“We hit the ball extremely well today and played with a lot of confidence defensively. Sarah pitched another very good game for us and everything just kind of fell into place.

“Fairview has a good team and certainly had a fine season, but today was our day.”

The Streaks (21-6) face thirdranked Elmwood in a Division III regional semifinal at Brookside Park in Ashland, Thursday, May 29 at 5 p.m.

Thursday winners play for the regional championship, Saturday, May 31, 12 p.m. at Ashland.

Lee was the Royals’ pitcher in that game, but AHS will see Brittany Dauterman, their ace, in this contest.

“We will certainly have a huge challenge in front of us with Dauterman on the mound,” said Frank. “She is averaging almost 17 strikeouts per game, and is one of their best hitters as well.

“One thing about this group of young ladies is they don’t mind a challenge, and we’ve certainly got one in this game. We will show up and compete the very best we can and see where that takes us.”