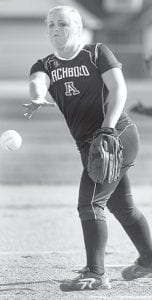 Hanna Allison on the mound for the Blue Streaks.– photo by Mary Huber

The Archbold softball team defeated Edgerton 19-8 in five innings while dropping close games to Crestview and Parkway by 8-6 and 5-4 counts, respectively, last week.

Poor defense was the downfall of the two losses as the Streaks committed nine errors in the contests, said Joe Frank, AHS head coach.

The Streaks jumped out to a 6-1 lead after one inning and cruised to the victory, Tuesday, April 3.

Cassidy Wyse had a big day at the plate, going 3-3 with two singles, a grand slam home run, and six runs batted in.

Hanna Allison, Gerig, and Rupp homered, along with Wyse.

Allison picked up the win on the mound, pitching 3 2/3 innings while giving up one run on two hits. Hannah Kern and Winter Fricke also pitched.

The Streaks jumped out to a 4-0 lead after one inning and led 6-4 going into the seventh before falling to Crestview 8-6, Saturday, April 7.

Two Blue Streak errors opened the door to the rally as they couldn’t hold on to the lead.

Archbold was unable to rally in the bottom of the seventh and fell to the Knights.

Wyse led the way at the plate, going 3-4 with a double while Allison was 2-4 with a three-run homer. Goebel was also 2-4 with three runs batted in.

Allison was the toughluck loser on the mound. She gave up 10 hits but only two earned runs. The Streaks committed five errors in the loss.

The Streaks continued their struggles in the field in game two of the doubleheader and lost to Parkway 5-4.

Kern pitched the first five innings and took the loss on the mound. She gave up six hits while striking out two.

Fricke pitched the last two innings and held the Panthers scoreless while giving up one hit.

Facing a 5-2 deficit, Wyse singled and Allison hit a tworun home run to narrow the gap to 5-4. Rupp hit a twoout triple, but was stranded at third as the game ended.

Wyse led AHS with two hits, including a double.

“This was an extremely frustrating day,” said Frank. “We failed to make routine plays and cost ourselves a chance to win two games.

“We had seven errors in our first six games and committed nine in the two games today.

“I am hoping that we can regain our confidence on defense, because we will have a tough time beating anybody playing the way we did today.

“We have to get things turned around quickly with Northwest Ohio Athletic League contests beginning this week. I am confident that we will get it turned around, because we have shown we are capable of making plays that we failed to make today.

“We need some leaders to step up and get the job done. We will see if that happens this week with six games coming up.”