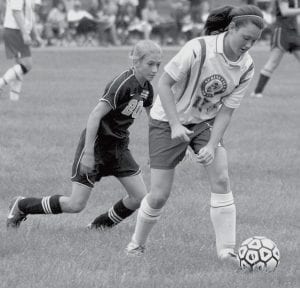 Trisha King battles a Blue Devil for control of the ball in soccer action against Springfield earlier this season.- photo by Scott Schultz

The Archbold soccer team defeated Wauseon, Swanton, and Lake last week to up its record to 10-0-1.

The Streaks hosted Wauseon, Tuesday, Sept. 18. Both teams battled hard, but Archbold came out on top 4-1.

Wauseon scored the first goal. Minutes later Bri Wyse scored to tie the score at 1. Grace Yoder had Archbold’s second goal and Alicia Drewes had the last two. The Streaks took a 4-1 victory.

Drewes scored twice more with the help of Wyse and Paige Stamm. Elise Sauder scored for a 5-0 lead.

With assists from Drewes, Wyse, Ramirez, and Yoder all scored for the 9-0 victory.

The Blue Streaks came out with a 5-0 victory, Saturday, Sept. 22 over Lake. Wyse scored the first goal, and Drewes scored twice to widen the lead to 3-0.

Drewes and Moshier teamed up to assist Ramirez for the fourth AHS goal. Ramirez scored the final goal when she was fouled inside the 18-yard line to cause a penalty kick. The final was 5-0.