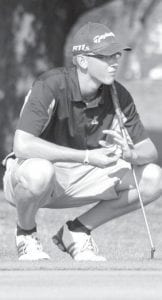 Archbold improved on last year’s sixth-place finish, taking third place out of 16 teams with a team score of 318 at the Stryker Golf Invitational, Saturday, Sept. 8.

Wauseon won the tournament with a team score of 308. North Central was second with 316.

Kevin Boyers and Antonio Cuellar each shot an 81, while Zach Short shot an 82 for AHS.

“Riverside Greens played tough, Saturday,” said Mike Rosebrook, AHS head coach. “Windy and cold, plus it rained that night, which meant no roll off the tee.

“Wauseon finished strong and earned that one. Stuart (Wyse) finished well. He started well and played great all-around. He maneuvered his ball through the wind and into some really nasty pin placements, leaving himself uphill putts instead of downhill benders.

“He plays very mature golf. That’s hard to teach. You pick that up during lots of tournaments.

“He’s worked hard all summer, and he’s fun to watch. He really showed he has all the skills to win in adverse conditions.

“It couldn’t happen to a better person, either. The way he conducts himself is very admirable.

“You learn by playing against those who are better than you. Our other guys ought to pay attention to the way he hits his wedges, because they save pars all day if you practice with them.