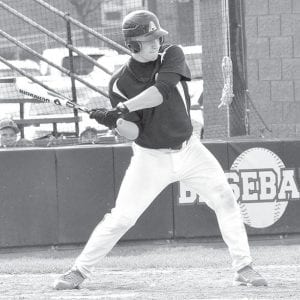 Evan Wyse hits a single for the Blue Streaks against Wauseon, Thursday, May 2.– photo by Mario Gomez

In a non-league contest, Saturday, May 11, the Streaks topped the Patriots 2-1 at PH.

Tyson Schnitkey (4-2) recorded the win. In 4 1/3 innings he gave up one run on two hits, struck out five, and walked six. He and Michael Walker combined for a three-hitter and allowed PH (15-6) only one unearned run.

The Patriots were ranked 12th in Division III by the Ohio High School Baseball Coaches Association.

Archbold had five hits, and was led by Zach Short with a run-batted-in single.

Archbold took advantage of six Hilltop (5-14) errors and the hot bat of Jacob Wagner in its 12-2 win over the Cadets, Wednesday, May 8, at Hilltop.

Wagner broke the game open in the fifth inning with a three-run home run. He drove in six runs in the contest.

Jase Grosjean added a single, double, and one RBI. Walker and Short each had two singles and one RBI, and Emerson Radabaugh had a two-RBI single.

Taylor Price (4-0) recorded the win on the mound. He gave up one run on four hits, struck out eight, and walked three in five innings.

Wauseon captured its first league title since 2004 with a 15-2 win over Swanton, finishing 8-0 in the league.

After two scoreless innings the Bears took a 3-0 lead in the top half of the third.

The Streaks, who pounded out seven hits in the contest, rallied in the bottom half and closed the gap to 3-2.

That was all the scoring as the Bears picked up the win.

Walker suffered his first loss of the season (6-1), giving up three runs on eight hits, striking out seven, and walking one in seven innings.

Short and Grosjean led AHS at the plate with two singles each.

“We had opportunities but stranded eight runners on base, including (having) the bases loaded in the last inning,” said Dick Selgo, AHS head coach.

Archbold is scheduled to play Fairview (9-9) tonight, Wednesday, in a Div. III sectional final at AHS.

The Apaches defeated Paulding 9-1 in their sectional semifinal, Saturday, May 11.

The winner advances to a district semifinal, Thursday, May 23, 4:15, at Defiance High School.