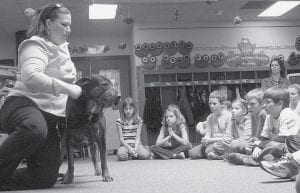 Archbold elementary school students watch Andrea M. Christenson, Fayette, demonstrate how her service dog, Coco, helps her get up from the floor. Christenson has Adult Onset Stills Disease, a rare form of arthritis. Coco was a stray her family adopted. Christenson trained Coco to assist her. Christenson and Coco visited the school Friday, March 27. – photo by David Pugh

Christenson, who graduated from Pettisville High School in 1998 and Ohio State University in 2003, was teaching agriculture at Patrick Henry High School, when, in October of 2004, she developed the first symptoms of Adult Onset Stills Disease.

AOSD is a rare form of arthritis that causes muscle and joint pain, extreme fatigue, fevers, and other health problems.

Eventually, she became too ill to work.

In January 2004, 10 months before Christenson became ill, an emaciated stray female dog wandered onto the family farm. Believed to be part coonhound, part Rottweiler, and part Labrador retriever, she was wearing a leather collar with a heart, but no tags.

The family cared for the dog they named Coco for six months. No one claimed her, so the Fulton County Dog Warden said they could keep her.

In those early days of her illness, Christenson was still trying to teach.

“I noticed that Coco was always by my feet, always there, trying to do something. That’s when I started thinking of service dogs,” she said.

She took Coco back to the home she was renting; but eventually, she moved back to the family farm, with Coco.

“I took her, but I brought her right back home with me,” she said.

Christenson had trained and shown dogs for 4H competition since she was nine. She ran into a woman who had been her 4H dog advisor, and asked if she had what it took to train her own service dog.

When she got an affirmative answer, she began researching training techniques.

Today, the 120-pound Coco does a variety of things for Christenson.

Coco pulls Christenson’s wheelchair and helps her stand up. When Christenson is lying in bed, Coco leans against her back to help support her.

When Christenson has spasms in her leg muscles, the dog will lie across her legs. The pressure of Coco’s weight, and her body heat, help Christenson’s sore knees.

She told the Archbold students when they see a service dog in public, they should ask the owner before approaching or petting the animal.

She uses the command “greet” to tell Coco it’s okay snuggle up to a stranger for a little attention.

While Coco’s job is to help Christenson, in her “off-duty” hours she gets to be a family pet.

“She loves to chase balls and bunny rabbits when she’s off duty. I take off the gentle leader (head collar) and the harness, and she’s a dog,” said Christenson.

“On the farm, when she’s out of harness, she knows she can run and play, and chase the rabbits.

“I want her to still have that opportunity to be a dog, because some day she will have to retire, and a lot of dogs go into depression if they don’t have something to do when they retire from being service dogs,” she said,

Christenson said Coco, “has been my gift from God. He knew I was going to need her long before I did.” – David Pugh