Stopping for a School Bus 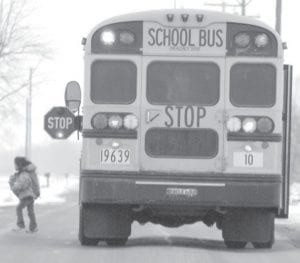 When a school bus is stopped on a roadway to pick up or drop off passengers, the following regulations apply to other drivers on the roadway:

1. When a school bus driver is preparing to stop the bus, he or she activates four amber lights– two on the front and two on the rear of the bus. These lights continue to flash until the bus is fully stopped.

Other vehicles are not required to stop during this preliminary stage of the eight-light warning but should prepare to stop as soon as the bus comes to a full stop.

When the bus comes to a complete stop, the amber lights stop flashing and four red lights, two in front and two in back, start flashing while the children enter or leave the bus.

In addition, a stop arm with flashing red lights is automatically extended beneath the window on the left side of the bus.

2. If the bus is stopped on a street or road which has fewer than four lanes, all traffic approaching the bus from either direction must stop at least 10 feet from the front or rear of the bus and remain stopped until the bus begins to move or the bus driver signals motorists to proceed.

3. If the bus is stopped on a street or road which has four or more lanes, only traffic proceeding in the same direction as the bus must stop.

School bus drivers believing a motorist has unlawfully passed the stopped bus will, if possible, report the license plate number to the law enforcement agency having jurisdiction over the area where the alleged violation occurred.

The law enforcement agency will attempt to determine the identity of the driver, and if the identity is established, the reporting of the license plate number by the school bus driver establishes probably cause upon which to issue a citation.

Failure to establish the identity of the driver will result in the enforcement agency sending a warning letter to the registered owner stating that a motor vehicle registered to the owner was reported as having unlawfully passed a stopped school bus.– Digest of Ohio Motor Vehicle Laws, Ohio Department of Public Safety