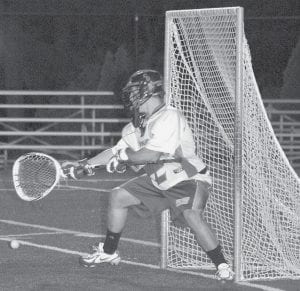 Chase Schultz, a 2005 Archbold High School graduate, tends goal for the United States Coast Guard Academy lacrosse team. Schultz, son of Scott and June, Archbold, started the season as a midfield attacker and midway through, suffered a back injury. After missing two games, the third class cadet returned as starting goaltender and went 3-0 to close the season. The Bears finished the regular season with an 8-6 record. They start conference tournament play, Saturday, May 3. Should they win the conference, they will qualify for nationals.- photo by Scott Schultz