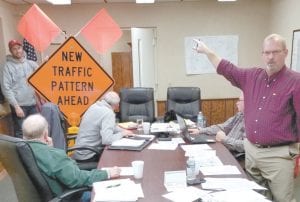 On a 2-1 split vote, the German Township Trustees voted to proceed with removing four-way stop signs on Co. Rd. 24 during their Monday, Dec. 9 meeting.

The actual conversion won’t be done until after the first of the year, said Leupp.

That’s when the Ohio Department of Transportation is expected to approve a grant to fund new solar-powered flashing stop signs at the intersections of Co. Rd. 24 with Co. Rds. B-C, E, F, and eventually, Co. Rd. G.

ODOT will provide the signs to the township, including a set for Fulton Co. Rd. A-Henry Co. Rd. W, where there are currently signs made by Josh King, township road superintendent, and Jeff Aeschliman, road maintenance worker.

Two signs for each of the five intersections would be a total of about $14,000.

During discussion of a resolution to change the intersections from four-way stops to two-way stops, Brodbeck said he wasn’t in favor of changing the stop signs on the county roads until safety concerns at the intersection of Co. Rd. 24 and St. Rt. 2 (Stryker Street) are addressed.

“I believe looking at that corner is more of a priority than doing something with stop signs at this point,” he said.

Brodbeck said with the exception of roundabouts, four-way stops are the safest form of intersection control, because there is a 40% less chance of driver error at an intersection.

He also said his own study showed that over 10 miles of Co. Rd. 24– from St. Rt. 34 to US20A– the additional stop signs added 1 minute, 14 seconds to the time it takes to cover the distance.

Plus, Brodbeck said, reducing the number of stops on Co. Rd. 24 would increase the number of passenger cars on the road and funnel more traffic through the St. Rt. 2- Stryker Street intersection, which has already been identified as a safety concern.

Further, he said, if the stops are removed, commercial trucks would possibly use Co. Rd. 24, and the road is not built for heavy truck traffic.

Although, he added, agricultural vehicles use Co. Rd. 24, and they are “for all practical purposes,” heavier than commercial vehicles.

Leupp said the flashing stop signs are “endorsed whole-heartedly” by ODOT, and that ODOT is putting its money where its mouth is by offering grant funding.

Leupp disputed Brodbeck’s assertion about safety, saying if drivers know cross traffic does not stop, they will be more alert at an intersection.

“I think we’ve done our homework. We’ve been very diligent about this, and we’re not acting irrationally. I’m sold on it, and I’d like to pursue it,” Leupp said.

Joe Short, president of the trustees, said the Co. Rd. 24 situation is “ticklish,” but added, “I can’t base my decision on social media, or signs placed illegally in the township right-of-way.

“Instead, I have to base my decision on facts, and facts that I’ve researched.

“The facts are not meant to change anybody’s thoughts. They’re just how I make my decision.”

Short referred to the Manual of Uniform Traffic Control Devices, created by the office of the United States Secretary of Transportation, that calls for all traffic controls to be in “substantial conformity” across the nation.

Short and Brodbeck agreed that if Co. Rd. 24 was built today, traffic engineers would not recommend the current array of stop signs.

Short brought up other concerns.

One is the intersection at Lafayette Street and Co. Rd. 24, where he said there have been several near-misses.

He asked Kevin Morton, Archbold Village Council president, who was at the meeting, if council is willing to work with the trustees to place warning signs at the intersection.

Morton said a study funded by the village of Archbold called for a roundabout at the intersection, but his short answer was yes.

Hayward said grant funding is available to fund additional patrols, if requested. He also said drones can be used to enforce traffic controls at intersections.

The trustees reiterated some of their concerns in further discussions.

Short said when the trustees receive the new signs from ODOT, the change of traffic patterns will be announced at a later meeting prior to the signs going up.

The next meeting is Monday, Dec. 23, 7:30 am, at the German Township building.– David Pugh