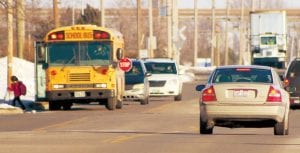 Top: An Archbold school bus drops off students on West Barre Road. Note that even though there is a center turn lane, vehicles traveling the opposite direction stopped for the bus. Bottom left: JoAnn Cousino and Linda Schmidt, Archbold bus drivers, aboard a bus. Bottom right: Diane Nafziger, a bus driver for the Pettisville school district.– photos by David Pugh

If you are driving on roads in the Archbold or Pettisville school districts and a school bus stops with its red lights flashing and stop sign displayed, you must stop.

Linda Schmidt, an Archbold bus driver, said, “This community is awesome, as far as stopping for us and taking care of us while we’re taking care of the kids.”

The majority of times when a car passes a stopped Archbold school bus, it’s on Defiance Street and West Barre Road, where there are center turn lanes.

“It’s the people coming towards us,” Schmidt said. “They don’t pass us when they’re coming from behind.

“I don’t know if it’s confusion on their part or they just don’t see us. They don’t stop when there’s a (center) turn lane.”

“Even if there is a turn lane, you still must stop.” 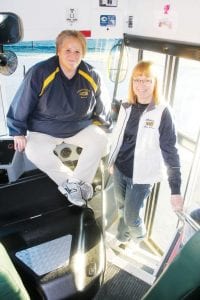 “A lot of times, if they don’t stop they’re on their cell phone or they’re distracted. I don’t know what else the reason could be.”

Diane Nafziger, a Pettisville school bus driver, said US20A has been a problem, particularly between Co. Rds. 19 and 20 near the woods on the north side of the road.

“That’s always a bad spot,” Nafziger said. “Years ago, I had a state trooper following me.

“When a state trooper follows a bus, they usually stay over to the right so oncoming cars can’t see them.

“A car ran my lights, and he turned right around, went after ‘em, and got ‘em!

“St. Rt. 108 is pretty good. People are really good about stopping, but they are not happy with me.

“If cars stop, I’ll wave to them,” but sometimes, drivers don’t wave back. 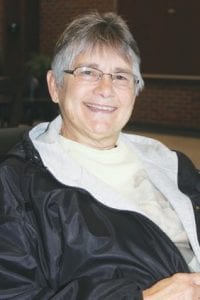 “I think people know they’re supposed to stop,” said Nafziger. “I think it’s a matter of they’re not thinking.

“I’ve had some run my lights, and I’ll honk my horn, and they’re astounded.”

But there are drivers who deliberately run bus lights.

Nafziger said she activates her yellow flashing lights long before she needs to stop.

Some drivers, she said, think they can pass the bus before the red lights come on.

State law says a driver is required to stop at least 10 feet away from the front or rear of a school bus.

“I’ve had drivers that will keep inching their way forward,” Nafziger said. “They’ll inch their way until they’re right next to me.

“That makes me so angry.”

Nafziger said when a car passes a stopped bus, she will alert students over the bus public address system and ask them to try to get the vehicle license plate number.

Schmidt said if a car passes a stopped bus, the students on board are usually oblivious to the violation, but Cousino said sometimes they see it.

“Every time it happens, it’s a teaching moment,” said Schmidt. “I’ll get on the microphone, ‘Did you see what just happened?’”

Students follow a set procedure when they get off a school bus that involves the driver using a hand signal. They must wait to cross the street until the driver lowers his or her hand.

The kids are usually good about following the rules.

“Some high school kids think it’s not very cool, but we have to remind them it’s for safety,” Nafziger said.

“The kids are good, but they’re still kids,” Schmidt said.

“They get in a hurry, or they’re excited to get home. Sometimes, they forget,” Cousino said.

All three drivers agree that if a bus stops to pick up or drop off students on a four-lane roadway, motorists approaching the bus do not need to stop.

“We can ‘cross’ a student over three lanes, with the third lane being a turn lane,” Schmidt said.

“When you get to four lanes, we cannot ‘cross’ a student, and oncoming traffi c doesn’t have to stop.”

“But we don’t have any four-lane (roads) in Archbold.”

Nafziger confirmed there are no four-lane roads in the Pettisville district, either.

Have there ever been close calls?

“You mean when the adrenaline starts pumping? Yeah, I’ve tried to come out of my seat with my seatbelt on,” Schmidt said.

“I’ve had cases where kids are waiting to cross, and I’m holding them back with my hand, and cars have come flying by.

“That’s close enough for me.” 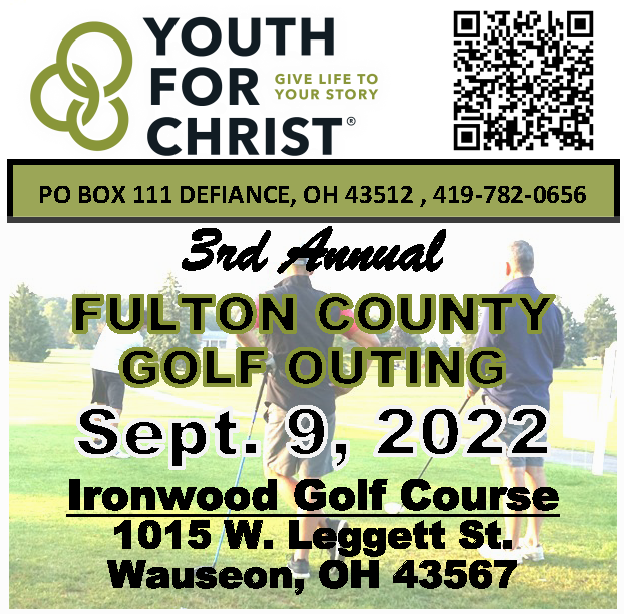