Jobe Gonzales Reynolds, also known as Jobe G. Reynolds, and Jobe Arturo Reynolds, 20, Fayette, was identified as the driver of the stolen car.

The chase began at 8:47 pm, when a deputy spotted the stolen car and gave chase.

During the course of the pursuit, speeds ranged from 20 miles per hour to 80 mph.

Gonzales-Reynolds faces multiple charges, including a felony count of failure to comply with the order of a police officer.

Miller said a deputy was dispatched to a mobile home park outside the village of Fayette on a report of a car stolen from a residence there. 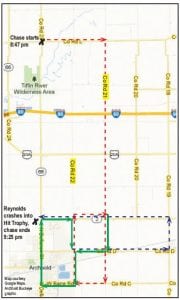 As the deputy was on his way to take the report, he spotted a car matching the description of the stolen auto at the intersection of Co. Rd. L and Co. Rd. 23.

The deputy began pursuing the car, and the chase was on.

Spike strips, designed to puncture fleeing vehicle’s tires and deflate them gradually, were deployed at Co. Rd. C and 21. The stolen auto hit the spike strips, and continued.

The stolen car, with deputies still on its tail, went through Archbold before turning back east on St. Rt. 2.

The chase went east at Co. Rd. D, then turned north into Pettisville on Co. Rd. 19, Pettisville’s Main Street. The chase continued north through the community.

Spike strips were put out at the intersection of Co. Rd. 19 and St. Rt. 2, and again, the stolen car maneuvered around them, and headed west on St. Rt. 2.

Miller said plans were to deploy spike strips again, but on orders from supervisors, the deputy struck the fleeing auto with his own car near the intersection of St. Rt. 2, St. Rt. 66, and Co. Rd. E.

By this time, the stolen car’s front tires, damaged by spike strips much earlier in the chase, were destroyed and the car was riding on the metal rims.

After contact with the FCSD cruiser, the stolen car went out of control, and crashed.

Gonzales-Reynolds was arrested and transported to the Fulton County Health Center, where he was admitted for medical treatment.

He was booked into the Corrections Center of Northwest Ohio the following day.

Gonzales-Reynolds is currently being held on a felony charge of failure to comply with the order or signal of a police officer.

He also faces misdemeanor charges of operating a motor vehicle while under the influence of alcohol, and failure to control.

As of Monday, he was still being held at CCNO.

His next court date was set for yesterday, Tuesday, at 10 am.

Miller said the decision to end the pursuit by forcing the stolen car out of control was made because, “It was getting a little too crazy.

“He was driving westbound in the eastbound lane of St. Rt. 2.”

The driver of the stolen car was presenting an increasing risk to the general public, he said.–David Pugh