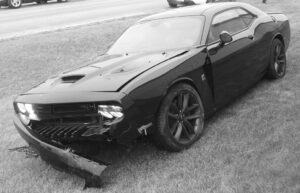 This Dodge Challenger, which crashed during a high speed chase through Archbold Jan. 11, is impounded at AA Truck Service, rural Archbold. Originally, it was said to have been released to the Strongsville dealership from which it was reported stolen. In fact it has been impounded at the AA Truck Service lot since the day of the chase. It is being held as evidence. This photo was taken the day of the chase.– photo by David Pugh

One of two cars involved in a high-speed chase through Archbold in January is still in the area.

Originally, reports said the Challenger was released to the dealership in Strongsville from which it had been stolen.

A Dodge Hellcat Charger was stolen from Terry Henricks Chrysler-Dodge-Jeep- Ram on Jan. 11.

Archbold police attempted to stop the Charger and the black Challenger in the 200 block of North Defiance Street. Both cars evaded officers.

At the intersection of Co. Rd. D, a sport-utility vehicle was attempting to make a left turn to go south on Co. Rd. 24.

The black Challenger swerved to avoid the SUV and crashed in the ditch on the southwest corner of the intersection.

Carrington was arrested at the crash scene and was taken to Fulton County Health Center.

He was later transported to the Corrections Center of Northwest Ohio. He was released on $100,000 bond.

The Charger was abandoned in Archbold and the alleged driver, Deztaney Spencer, 21, Cleveland, was arrested hiding on a front porch.

Paul Kennedy, assistant Fulton County prosecuting attorney, said, “Both Carrington and … Spencer are charged with receiving stolen property with respect to this car (the Challenger), which is being held as potential evidence until both cases go to trial.”

Liechty is charging storage fees for holding the Challenger. Kennedy said Fulton County taxpayers are not footing that bill.