Still No Trace Of Boys Missing From Morenci 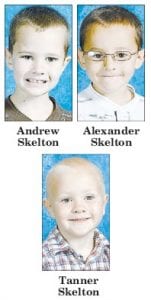 As the one-year anniversary of the disappearance of Andrew, Alexander, and Tanner Skelton approaches, there still are no clues as to their whereabouts, or even whether they are alive or dead.

The three brothers from Morenci, Mich., ages 9, 7 and 5, were visiting their father, John, at his home in Morenci over the Thanksgiving holiday.

John and his wife, Tanya, were separated. The boys were last seen playing outside on Thanksgiving Day, Thursday, Nov. 25, 2010.

Volunteer searchers combed areas of Lenawee County, Mich., and Fulton and Williams counties in Ohio, looking for the boys– or their remains.

Kathye Herrera, a friend of Tanya Skelton since childhood (known to the boys as “Aunt Kathye”), said those in the community are split about 50-50 on whether or not the boys are alive.

“It depends on who you talk to. The majority of law enforcement says the boys are gone, because statistics say if they’re not found in 48 hours, it’s not positive.

“The family goes back and forth. You can’t give up hope,” she said.

But Herrera said she “didn’t want to give up hope.

“I know they still get calls on the tip line (Morenci police, 517-458-7104), and the last time I spoke with Larry (Larry Weeks, Morenci police chief) I know they’re still following up on any tips.

“Some may seem off the wall,” but police still check them out, she said.

After the boys were last seen, Skelton allegedly attempted to commit suicide by hanging himself. A friend took him to an Ohio hospital.

Skelton has told different stories about the whereabouts of the boys. In one, he said he turned them over to an underground organization to prevent them from being abused, allegedly by their mother. Law enforcement could not confirm such an organization existed.

Another story was he turned the boys over to a woman he met over the Internet; again, officers were unable to confirm it.

There was a report of a sighting of the boys in a donut shop in Sandusky three days after they disappeared, but nothing developed out of the report.

In July, Skelton accepted a plea-bargain agreement, pleading guilty to three counts of unlawful imprisonment. The prosecution reserved the right to charge Skelton with murder if bodies are recovered.

He is currently serving 10 to 15 years at the Michigan Chippewa Correctional Facility, in the Upper Peninsula.

“That irritates me,” Herrera said. “With three children, the sentence should have been up to 45 years, but the sentences are concurrent.”

She said if all three boys are found alive after they have reached the legal age of 18, police cannot bring further charges against Skelton.

The Skelton brothers became a national story soon after they were declared missing.

The national press and electronic media descended on the town of about 2,200.

Herrera said in her personal opinion, having the media in town was good and bad.

Good, because it got pictures and information about the missing boys before the public.

Bad, because some of the media’s practices didn’t result in a true picture of the situation.

“They would go up and down the street and just grab a person and interview them, because they gotta have a quote,” she said.

Reporters also asked how the family was doing, or, “How are they handling it?

“That’s a stupid question! The family is very emotional,” she said.

“I had a couple (of reporters) take my words out of context.”

At one point, Herrera said residents told her reporters tried to look in the windows of the family home.

Two events are planned in connection with the one-year anniversary.

There is a gathering at 2 pm, Sunday, Nov. 27, at the Morenci High School gymnasium. Herrera said Tanya will speak.

“I’m so proud of her. She’s finally gotten to the point that she can do things without mentally closing down.”

Other speakers include Weeks, a Michigan State Police officer, and the mayor of Morenci.

There will be special music. A cousin of the boys, a high school senior girl, has written a poem about the missing youngsters.

“She’s really emotional, but if she breaks down, it’s okay,” Herrera said.

Officers of the Morenci Police Department, Michigan State Police, and the Federal Bureau of Investigation will conduct a “road canvas” on US 127 at Morenci Road, stopping cars and passing out flyers to motorists.

Specifically, they are seeking any sightings of Skelton’s dark blue 2000 Dodge minivan, which they believe Skelton was driving between 4 and 7 am the day after Thanksgiving a year ago. The canvas will be conducted during the same hours on Friday, Nov. 25.

Cell phone information indicates Skelton may have been in the Holiday City area, in Williams County.

Herrera said in the past two years, Morenci has been rocked by several tragedies, including a fatal car crash, teen suicide, fatal hunting accident, drowning, homeinvasion robbery, and a house fire in which a father ran back into the blaze to try to save a child. Neither one made it out.

“It’s made people closer. They pay more attention to one another,” Herrera said.

She also credits the faith of Tanya Skelton’s family.

“They have a strong religious background. Without it, I don’t know how they would have made it.

“It’s the one thing that’s held them together.”