The Streaks (21-9) had already beaten the Generals 11-8, Sunday, July 21, sending Anthony Wayne down to the loser’s bracket of the double elimination tournament.

The Generals then beat Coldwater 11-1 in the finals of the loser’s bracket Sunday afternoon, setting up a Monday rematch with Archbold.

If the Streaks were victorious in the 6 pm Monday contest, they would win the state title. If they lost, both teams would play again at 8:30 pm for the championship. 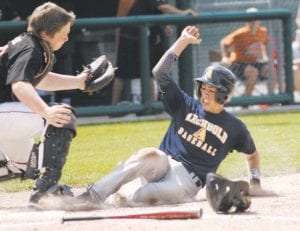 “We were kind of like the underdog,” said Derric Martinez, in his first year as Archbold Junior Acme head coach.

“We weren’t afraid of them. They’re a very good team– a very good hitting team (and) pitching team.”

In the first game, Archbold led 1-0 after the first inning when Ben Bucklew scored on a Hayden Galvan single.

But the Streaks had a disastrous second inning, allowing the Generals to score eight runs.

That was all they needed as the Streaks scored two runs in the second and two in the third, but no more.

Lathon Babcock was the losing pitcher. 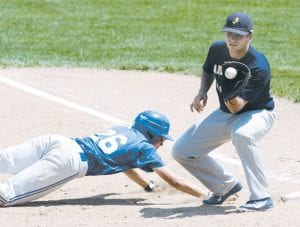 Archbold again led 1-0 after one inning, but the Generals tied the score in the top of the fourth off a wild pitch.

Then Anthony Wayne put the stake in Archbold’s heart with six runs in the fifth and captured the state title.

Pitching in relief, Walker was the hard-luck loser. In one inning he allowed four runs on three hits, struck out none, and walked two.

Walker hit a double, while Seth Mayer and Ian Radabaugh each had two singles to account for Archbold’s five hits.

“All season long, toward the beginning of the year we were having these types of games,” said Martinez.

“We would play six innings, and one of those innings we just wouldn’t play. The wheels would just kind of fall off. That’s what pretty much gave us all our losses.

“Obviously, when we play all seven innings we’re a very good team. That’s the team we had the whole tournament until today.

“We couldn’t get that timely hit. The first game the kids didn’t give up. They battled through it.

“The second game– it was kind of hard to come back on that one. They still worked hard, and as a coaching staff that’s all we can ask from the kids.

“As long as they’re working hard we’re happy. We thought that’s what they did.

“I’ve coached these kids for, like, eight years now. I’m very proud of them that they got to this stage.

“Getting to this stage, they have become one team. That’s great to see; how, in the beginning of the year, we kind of struggled a little bit, and then towards the end of the year we became one.

“And obviously, when you become a team, things can happen. You can make it to state.

“I was blessed to have these types of kids. They’re hard-working kids and they love the game.