Start Stops Streaks In Their Tracks 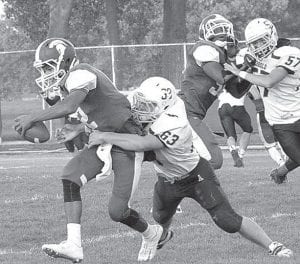 Archbold traveled to Toledo to face the Start Spartans, Friday, Sept. 19, for the first-ever football meeting between the two schools.

Trailing 14-7 after the first half, the Blue and Gold was shut out in the second half and dropped their fourth consecutive game, 27-7.

After a scoreless first quarter, Start (2-2) got things rolling with a 5-yard touchdown toss from Brandon Winters to Evan Butler for a 6-0 lead with 8:50 left in the second quarter.

Derek Walker answered for AHS, connecting with Levi Wyse for a 58-yard strike. The Seth Mayer point-aftertouchdown attempt gave the Streaks a 7-6 lead.

After an exchange of possessions, Archbold (0-4) had the ball back with under three minutes left in the quarter when Aaron Williams picked off Walker. Williams scampered 48 yards for the score for a 14-7 Start advantage at the break.

The Streaks were plagued by turnovers again, as Walker tossed three interceptions and the Blue and Gold lost one fumble.

The Spartans’ Sephon Watson chewed up the ground game for the home team. Watson rambled for 156 yards on 27 carries and crossed the goal line twice on 4 and 10 yards, respectively.

“Turnovers– we had three in the first half,” said Bryan Miller, AHS head coach.

“We have to get some things figured out.

“We have guys that need to start playing better. We have some guys that are good football players that are busting their tails, and like I told them, we have some weak links out there.

“Until those guys get tough, start making plays and start finding a way, we are going to be hit or miss.

“We will have a good quarter or a good series, but unless we can get 11 guys to do it for 48 minutes, it’s going to be a long season that is disappointing.

“Our defense played solid. We did give them one touchdown on the interception, but if we can keep a team to three touchdowns we should win the game.

“Our offense has been terrible this year, and that is my fault.

“The one touchdown we scored was a terribly-executed play; we just happened to have the fastest guy on the field.

“We have to go back to the drawing board on offense and keep working.”