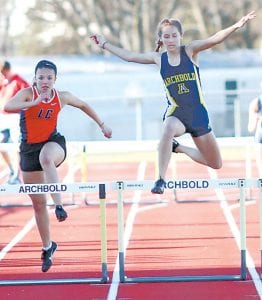 She may not have had the best form, but Dakota Stamm finally got her wish to run the 300-meter hurdles in a track & field meet. The AHS senior, right, won the race in a tri-meet with Liberty Center and Delta, Tuesday, April 9. Liberty Center’s Sophie Long, left, finished second.– photo by Mary Huber

The stars were in alignment as Dakota Stamm, a senior at Archbold, finally got her wish– to run the 300-meter hurdles at a track meet.

And she even won!

Stamm, who won the 2018 Division III state championship in the 400-meter dash, has wanted to run the 300- meter hurdles for a couple of years now.

After Stamm finished second in the 400 at the state meet in 2017, she asked Dina Gladieux, AHS head track coach, if she could run the 300 hurdles as a junior.

Throughout Stamm’s junior year, she would stop in Gladieux’s room and say, “‘I’m looking forward to the hurdles my senior year after I win state as a junior in the 400,’” Gladieux said.

“I never doubted her ability to win the 400 at the state meet; I just counted on her not remembering the whole hurdle agreement. I was wrong!

When asked about Stamm’s wish, Gladieux said in her preseason preview, “The stars have to all be in alignment for that to happen, but yes, there is a possibility that she may run the 300 hurdles at a Tuesday meet if the weather is nice.

“And it would have to be early in the season.

“After the third Tuesday in April if she hasn’t run them, she won’t.”

Stamm got her wish Tuesday, April 9, when AHS hosted Delta and Liberty Center for a Northwest Ohio Athletic League tri-meet.

The problem is, the 400 dash and 300 hurdles are run back-to-back, so there isn’t enough recovery time for a runner to do both.

She won in 51.6 seconds, three-tenths (0.3) ahead of second-place Sophie Long of Liberty Center.

“It was a lot of fun. It definitely was worth it,” Stamm said.

“Yesterday was my first practice, and it was shortened because we volunteered to help with the junior high meet, so I practiced for about a half hour.

“I had absolutely no form. I’d only ever run one hurdle and then I stopped in practice yesterday.

“I wouldn’t mind running this in another Tuesday meet, but the 400 is still where I’m gonna stay.”– Mary Huber