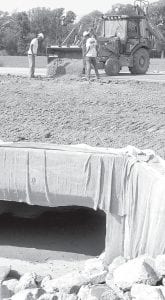 Construction workers put down the stone berm on the new road surface over a culvert at the intersection of US 6 and Henry Co. Rd. 21, Thursday, Aug. 30. They anticipated the road would open to traffic Friday afternoon, Aug. 31, the start of the Labor Day weekend.– photo by David Pugh

Culverts have been repaired on St. Rt. 66 between St. Rt. 34 and St. Rt. 2 in Henry and Fulton counties, and much of the roadway has been resurfaced.

The road has been open to motorists.

Also, a new culvert installation at the intersection of US 6 and Henry Co. Rd. 21 has been completed and the road is now open to traffic. Construction workers on the scene said the roadway was set to reopen Friday afternoon, Aug. 31.

ODOT still is planning to resurface St. Rt. 2 from Fulton Co. Rd. E to the Archbold village limits. A date for that portion of the project was not available.

In other roadwork news, construction crews were doing fine grading in preparation for paving on the North Buehrer Street-Schlatter Street-Burke Street reconstruction project.