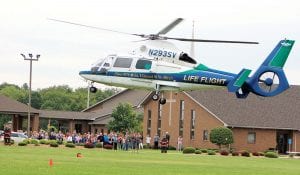 A helicopter settles down to land in the grass near the St. John Lutheran Church at US 6 and St. Rt. 66 late Sunday morning, Sept. 8. The event celebrated an agreement between the Mercy Health helicopter ambulance service and the church to use the church parking lot as a safe landing zone. Company officials presented the church with a automatic external defibrillator, which can restart a heart that has gone into cardiac arrest.– photo by David Pugh

St. John Lutheran Church and the Mercy Health Life Flight network have joined together in work they already do– helping people.

The church, located at St. Rt. 66 and US 6 south of Archbold, concentrates on the spiritual side, while Life Flight crews are concerned with the medical side.

Now the church has offered its parking lot as a safe place to land to pick up patients.

The agreement was commemorated when the helicopter landed on a grassy area west of the parking lot, just as the congregation was finishing its annual Harvest Festival, Sunday, Sept. 8.

Dan Hurst, a flight nurse and member of the congregation, said a former Life Flight director began the effort to find pre-determined landing zones– places that are safe places to land, in well-known locations.

“We looked… where the helicopter is actually requested most frequently. One of the highest requested areas in Northwest Ohio is… at (Henry Co. Rd.) 24 and (St. Rt.) 34,” Hurst said.

One instruction was to “find spots where we’re going frequently, and find us a better spot to land other than on the road next to the power lines or in a wet cornfield,” Hurst said.

The St. John parking lot was an obvious choice.

“That was the genesis of it. Then the church took it and ran with it,” he said.

Church elders discussed the proposal “and thought it was a great idea.”

“We believe we should serve Christ as He served us, and one way to serve Him and the community would be to offer this place as a safe landing zone, if needed or when needed,” he said.

The elders made a small presentation to the congregation “and everybody said that was great,” Weaver said.

One thing the church must do is leave the parking lot lights on all the time. Is that expensive?

“It’s not as big an expense as we thought it would be,” Weaver said.

Doug McMahon, helicopter pilot, said the parking lot does have some challenges. Pilots must avoid the posts that hold the lights, the church building, and the steeple.

He said the parking lot is “a waypoint, an outpost. Everyone knows where it is, including the ground people. ‘Go to the church between Stryker and Ridgeville.’”

Before, where the helicopter landed was up to rescue squads, and they might unwittingly pick a place that’s not the best.

Now, rescue workers on the ground can take the patient to the church and meet there.

The coordinates of the parking lot are programmed into the helicopter navigation system. Touch a few buttons, and it’s ready to take the crew there.

The lot is paved, so the helicopter doesn’t sink into soft soil (as it did in the grassy area where it landed Sunday).

Hurst said the Ridgeville Township Trustees have offered to keep the church lot cleared of snow, ready to ac- cept the helicopter.

It takes Life Flight seven minutes to fly from the base at the Fulton County Airport to the church. From there, it’s less than half an hour to Mercy St. Vincent Medical Center, Toledo.

A ground ambulance might take an hour or more.

Following the service, Charles Kramer, guest pastor, blessed the helicopter and its crew, asking God to allow the flight crews “to be instruments of healing in your hands.”

During the commemoration, Mercy officials also presented the church with a automatic external defibrillator, which can restart a heart that has gone into cardiac arrest.