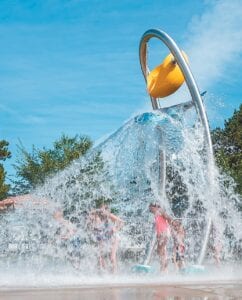 One of the water features of the proposed splash pad, slated to be built in Ruihley Park. The pad is being constructed with donations and grant money.– courtesy photo

Jennifer Kidder, Archbold Parks and Recreation director, said Monday, March 8, a total of about $124,000 has been raised for the Ruihley Park splash pad project.

Village officials have applied for a 50/50 matching grant through the United States Department of the Interior Land and Water Conservation Fund that would cover half of the $430,000 cost.

Kidder has said if Archbold can show that it has the local share of money available to proceed with the project, it will improve the chances the village will receive the grant.

If the village raises more than the amount needed for the local match, she has said the additional money will either add additional features to the splash pad, or be used for picnic/shade structures. 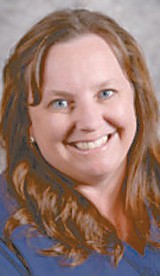 A splash pad is a playground with features that spray water. Children can play in the water streams, much like running through a sprinkler at home.

A recent fundraiser at a local restaurant raised $600 toward the project.

In a related matter, Kidder said $11,000 has been raised for a dog park in Woodland Park.

A dog park is a fenced area where dogs can run and play off leash.

The idea for a dog park was first discussed in September 2013, when Archbold Park Board discussed the possibility of creating such a facility.

A site in Woodland Park, south of Woodland Drive and west of the woods, was selected.

Fencing alone for the dog park will cost $17,000. Other amenities, such as benches for dog owners, would drive up the price.

Kidder has said no Park Board money will be used to finance the project.

If enough money can be raised, Kidder said the dog park project will proceed.