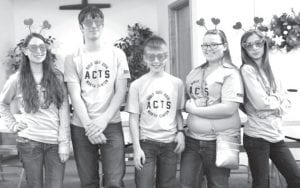 Dressed up for Bible Quiz Spirit Week, “Hearts of Faith” members quizzed their hearts out to win four matches and average 105 points in their six matches at the Sunday, Feb. 21 quiz meet. Passing out heart rings and candy throughout the day, the team was recognized for acting out their team name. From left: Cara Foor, who averages 35 points and has quizzed out in all 19 of her matches, with teammates Derek Aeschliman, Logan Richer, Mindy O’Neill and Hannah Richer, who averages 30 points per match.– courtesy photo

Along with studying the Bible and building positive friendships, 70 area Bible quizzers met at Tedrow Mennonite Church, Sunday, Feb. 21, prepared to dress, act and even sing out their team names for Team Spirit Week.

The three teams chosen by the staff for best displaying team spirit were “Sojourners” from Archbold’s YFC Outback, who dressed as travelers and passed out trail mix; “Acts Ray Vision,” Eastland Baptist, Bryan, who sang a rap song modified to fit Paul’s story from Acts; and “Hearts of Faith,” North Clinton Church, Wauseon, who were all about hearts.

This year, every meet is full of surprises.

Even though “Flame of Fire” from Sonrise Community Church, Ney, came into the meet in ninth place, it was well-prepared to quiz and won the day, averaging 119 points in its five matches.

In its only loss of the day, “Flame of Fire” was still leading 95-75 with just two questions left when “Hearts of Faith” quizzers Hannah Richer and Cara Foor both quizzed out to take the match 105-95.

The second-place traveling trophy went to “Right” from House Church, who won all six of its matches and averaged 114 points.

“Acts Ray Vision” had its best day of the season, averaging 108 points and going 4-1.

Those quizzing out in all but one of their matches were Belle Clark, Chris Foor, Grace Sheldon, Joe Richer, Keri Aeschliman, and Tessa Waidelich.

The top 25 individuals and top four teams will be recognized.

An area tournament is planned for Sunday, March 13, at Central Mennonite Church.