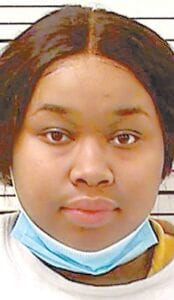 Deztaney Spencer, 21, Cleveland, the woman who stole a high-performance car from a local dealership, has entered guilty pleas to the charges against her.

In documents filed in Fulton County Common Pleas Court, Spencer changed her pleas Tuesday, Aug. 3, to guilty to charges of receiving stolen property, grand theft of a motor vehicle, both fourth-degree felonies, and failure to comply with the order or signal of a police officer, a felony of the third degree.

A Fulton County grand jury indicted her on those charges Monday, Feb. 8.

On Monday, Jan. 11, Spencer stole a Dodge Hellcat Charger from Terry Henricks Chrysler-Dodge-Jeep-Ram. Police attempted to stop the stolen car in the 200 block of North Defiance Street, but the 700-plus horsepower Hellcat evaded them, and a chase ensued.

The chase made its way to Stryker, then back to Archbold, where the Hellcat was abandoned on West Street, low on fuel. Spencer was captured attempting to hide on the front porch of the Friendship House, 118 South Defiance Street.

She was booked into the Corrections Center of Northwest Ohio, where she has been held ever since. Bond for Spencer was set at $100,000.

No sentencing date has been set.

Currently free on $100,000 bond is Thorne D. Carrington, 28, Richmond Heights, who was driving a high-performance Dodge Challenger and was following Spencer in the chase. That car crashed near the intersection of Co. Rd. D and Co. Rd. 24.

Police later discovered the Challenger had been stolen from a dealership in Strongsville.

Felony charges of complicity to commit grand theft of a motor vehicle, receiving stolen property, and failure to comply with the order or signal of a police officer are still pending against Carrington.

Each of the three counts against Carrington carries a firearms specification, indicating that during the commission of the crimes, Carrington had a firearm either in his possession or under his control.–posted Thursday, Aug. 5, 5:22 pm