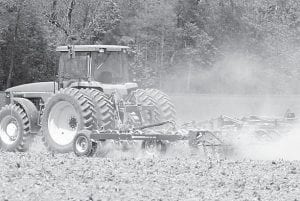 Eric Richer, Fulton County agricultural extension agent, said the past week or so has offered spectacular weather for planting.

He anticipated that by today, Wednesday, county farmers would be 95% completed planting corn, and 50% finished with soybeans.

“Since about May 4, planters have been running every day. Maybe there were a couple of days when they were held back,” he said.

Scattered rain showers Wednesday and Thursday, May 8-9, deposited up to two-tenths (.2) of an inch of rain. Richer said that was enough to keep farmers out of fields for about 24 hours.

But even with the rain, “We’ve been very satisfied with the planting conditions.”

Richer admitted there was a scare when, during late April, the area was drenched with four inches of rain.

But things dried out enough to get machinery in the fields.

Richer said farmers growing alfalfa need to be on the lookout for the alfalfa weevil.

“They need to be scouting their fields, starting yesterday,” Richer said.

When alfalfa is 12 inches or less in height, and one or more large larvae are found on each stem, that’s an indication of the need for treatment.

If treatment is indicated, Richer recommends talking with a local coop or farm service dealer, as there are a number of chemicals available to treat for the weevil.– David Pugh