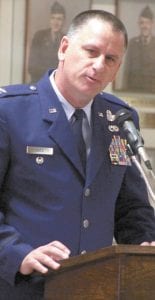 Then she pointed out World War II, “The Big One.” 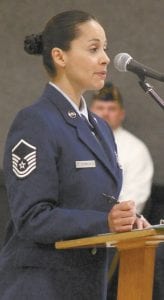 In Vietnam, he said 13 Americans died every day.

During the Korean War, there were 33 Americans killed every day.

In WWII, 317 Americans died each and every day.

Champion said WWII was a war of good versus evil, with society as we know it at stake.

America was unprepared for WWII, but quickly mobilized. Citizens became warriors, and some of those warriors are still with us today.

“Look at these men again. Look at what they are, where they have been, and what good they have done for the country and the cause of freedom around the world,” she said.

She said WWII veterans “left a legacy of freedom. They taught their children and their children’s children the values of sacrifice and worth and virtue, the necessary conditions of freedom; and they taught us to love our country. 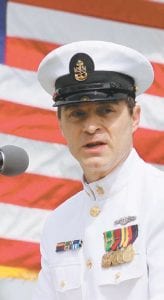 “These soldiers became, have become, our teachers. Their presence here in the words and deeds of their lives reminds us of human excellence, of the things of which we stand, of the courage that is necessary to maintain those things.

“They taught us what it means to be a citizen (of the country) that is the last best hope of earth.

“We should look at their courage, their determination, and their actions.”

Yet, when the war ended, Americans did not enslave the vanquished nations; rather, they helped rebuild them.

“It is no wonder that the 20th century has come to be called The American Century,” she said. 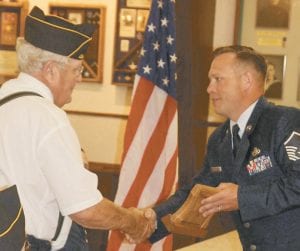 “According to the medal of honor that was posthumously awarded to him, he distinguished himself by extraordinary acts of heroism,” he said.

“This man repeatedly exposed himself to enemy fire, all the while telling his friends to fall back.

“What drives a man to place himself in the line of fire, over and over again, to the point of death?”

D’Alelio pointed to Bible passage John 15:13: “Greater love hath no man than this, to lay down one’s life for his friends.”

“Robby died doing exactly what his brothers in arms would have done for him. Ignoring his wounds for the sake of his friends, and facing 100 to 1 odds, without hesitation.

“Robby Miller’s heroism and selflessness above and beyond the call of duty, at the cost of his own life, are in keeping with the highest tradition of military service, and reflect great credit upon himself, the United States Army, and the fighting spirit of those that are defending our freedoms today.”

“All of these terms are synonymous with the character of the Americans that are enabling us to live free.

“Men and women who look like no one special, act like no one special, don’t want to be pointed out as anyone special, and when these nobodies are placed in a situation that requires them to show courage, when they are confronted with insurmount- able odds in which no one would fault them if they turned and ran, they do the unthinkable.

“These nobodies face the monster in front of them, and advance towards it.

“This is the character of the nobodies that have died selflessly in the service of this country and for your freedom.”

Champion told her audience Abraham Lincoln said it was up to the living to complete the promise of the founding principles of our nation.

“More than 1.2 million American men and women have perished as a result of military conflicts,” she said.

“Because of them, we are able to live in a free society that even our most desperate enemies admire.

“As Americans, may we never forget those who fought for our freedom, especially those who made the ultimate sacrifice to make this great country the land of the free and the home of the brave.”

Reed said there is a way to show gratitude to those who died in service to their country.

“Make this country worth dying for.

“We can each do this in our own unique way, according to our own abilities, and when we do, it redeems their sacrifice,” he said.

He called for people “to put aside our pettiness, find common ground. Make this nation a better place in honor of those who fell.

“Make sure our comrades have not died in vain.”