Spartans Not So Pleasant As Streaks Stunned In Regional Semifinal 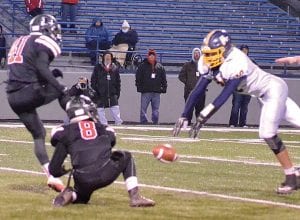 Archbold played a dominating style of football for most of the evening against Marion Pleasant in a Division V Region 18 semifinal at Donnell Stadium in Findlay, Friday, Nov. 10.

It was the final 75 seconds that doomed the Streaks as they dropped a 28-24 heartbreaker.

“It was a very tough loss for us,” said David Dominique, Archbold head coach.

“There’s really no words I can put to express how I’m feeling right now.

“We didn’t make enough plays tonight, and they (Pleasant) made more.”

The Spartans won the coin toss and elected to receive the opening kick.

Archbold looked more than ready for the challenge the Spartans posed with their potent running game, forcing the Spartans into a threeand out.

The Streaks took over on the Pleasant 49-yard line and marched down the field in 10 plays. Kaiden Bedsole’s 25-yard field goal gave Archbold a 3-0 lead with 7:34 left in the first quarter. 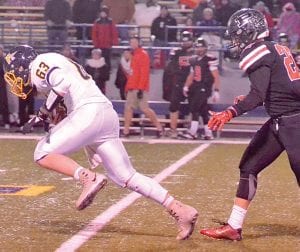 After exchanging punts, Pleasant put together a fiveplay drive that was helped by a pair of long runs and ended with an Ethan Warner 5-yard touchdown run to go up 7-3.

Archbold answered on its next drive when Sam Petersen, playing quarterback in place of injured brother Gabe, drove the Streaks down to the Spartans’ 13 and hooked up with Noah Gomez for a 13-yard touchdown pass to retake the lead at 10-7.

Archbold tried an onside kick that was recovered by the Streaks, but the officials ruled that the ball had been touched illegally. Pleasant took possession at the Archbold 34.

Patrick Blubaugh took the handoff and scooted 31 yards on the first play of the drive for a 14-10 lead with 11:47 left in the first half.

After four straight running plays moved the ball down to the Spartans’ 33, Petersen dropped a long touchdown pass into the waiting arms of Nic Rodriguez for a 17-14 lead that the Streaks took into the locker room.

“You’ve Got To Survive And Advance”

Archbold took the opening kickoff in the second half and sustained a long 11-play drive that took nearly five minutes off the clock but ended with a missed field goal attempt.

Pleasant took over, marched down to the Archbold 25, and lined up for a 42-yard field goal try.

Senior linebacker Ben Zimmerman busted through the line and blocked Logan Thompson’s kick. Matthew Gladieux recovered the ball and the Streaks took over at the Pleasant 47.

Archbold extended its lead to 24-14 when Gomez powered his way through the Pleasant defense to score from 9 yards out.

The Spartans took the ball with 11:48 left, ran their way down the field, and scored on a Warner-to-Blubaugh 13-yard pass to pull within three, 24-21.

Archbold went three-andout on its next possession. The Spartans took the ball over at their own 33, but were forced into a three-andout of their own.

After the Streaks gained one first down, they were again forced to punt on fourth down.

After gaining a first down that moved the ball to Pleasant’s 41, Warner was intercepted by Petersen. Archbold had the ball with 2:23 remaining on the clock.

Pleasant used its timeouts and Archbold ran off only 1:08, but pinned the Spartans at their own 7 with 1:15 left.

Archbold nearly sacked Warner in the end zone on the first-down play, but instead dropped him at the 1.

Warner then hit Lane Russell for a 91-yard reception that moved the ball to the Archbold 8.

After spiking the ball to stop the clock, Warner avoided another sack and found Tristan Conklin in the back of the end zone for the gamewinning touchdown.

Archbold got the ball back with 15 seconds left. Gabe Petersen, AHS quarterback who suffered an injury in the Nov. 3 regional quarterfinals, trotted onto the field hoping to give the Streaks a chance, an interception ended Archbold’s hopes.

“We try to pound the ball, but we have good receivers and a good quarterback.

“We kept trying to do what we do but credit Archbold. They’re a great football team and their kids fought. They played great in their secondary, and they were pretty disciplined.”

“We knew coming in we’d have to stop their run, and we did that for the most part,” said Dominique. “They (Pleasant) played a good game and took advantage of some of our mistakes.

“They were able to get behind us on a couple of plays that really hurt us in the end.

“We were physical out there. I’m proud of what we were able to do.”

End Of The Road

It was the final game in a Blue Streak uniform for 15 seniors.

Picked by the coaches to finish fourth in the Northwest Ohio Athletic League, Archbold won the league championship with a 6-1 record and its 12th playoff appearance in school history.

“They left it all on the field, and as a coach that’s all you can ask for.”