Sons Of The American Legion 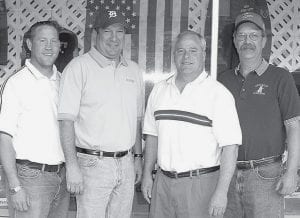 Officers of the Sons of the American Legion, Squadron 311, which formed recently in Archbold, are, from left: Jeff Forward, adjutant; Bob Liechty, squadron vice commander; Andy Dominique, squadron commander; and Brad Enderle, sergeant at arms. The group is for sons, stepsons, grandsons, and great-grandsons of veterans of the United States Armed Forces. Its purpose is to support the American Legion.- photo by David Pugh