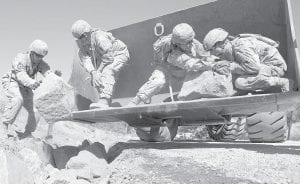 Above: Soldiers unload rocks along the U.S.-Mexico border in the San Diego, Calif. area. Soldiers are aiding the border patrol by improving more than two miles of road along the border. The work provides training the soldiers can apply in other areas of the world. At left: Michael V. Wilson, a U.S. Army private, was recently a part of an engineer support mission along the U.S.-Mexico border. Wilson helped with the construction of several miles of road along the border.– courtesy photos

He and other members of his unit helped repair and upgrade more than three miles of road along the U.S.- Mexico border in the San Diego, Calif., sector, near the Tecate Port of Entry.

Wilson, a heavy construction equipment operator, is assigned to the 82nd Engineer Support Company, 65th Engineer Battalion, 130th Engineer Brigade. The unit is based at the Schofield Barracks, Hawaii.

“I am here helping expand the roads in support of the border patrol,” Wilson said. 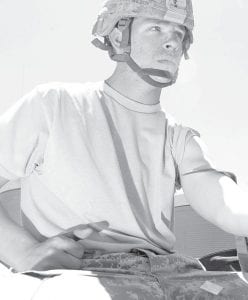 Active duty and reserve units, along with individual assets from all branches of the armed forces, typically tackle such jobs.

They are long-term operations that may take several months or years to complete.

Such types of missions are twofold for Wilson.

They also help secure the country’s borders, by improving the mobility and safety of the border patrol agents. Agents are on patrol 24 hours a day, responding to suspected illegal activities along the border.

“When my unit and I arrived here, the road we were going to repair was quite narrow and very rocky,” said Wilson.

“It was very difficult for the border patrol to navigate and travel at high speeds. Now the road is much more stable for them to travel on.”

Besides providing Wilson with training opportunities, the missions also teach units how to work in a joint military and civilian environment, environments that they will encounter on deployment to Iraq and Afghanistan.

“I am getting much more proficient on all of the equipment," he said.

"My goal by the time I leave here is to get so much experience that I will be able to teach and show others what I know."

A chuckle a day may not keep the doctor away, but it sure does make those times in life’s waiting room a little more bearable.–Anne Wilson Schaef