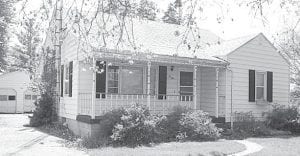 There have been complaints of a foul odor emanating from this vacant home, at 210 Wilson Street, for months, but now, Safeguard Properties, a Cleveland company, has said it will resolve the problem. A company spokesman said the issues at the property, including mold growing on the interior walls, would be addressed as quickly as possible. The house has been vacant since at least 2007. An inspector with the Fulton County Health Department found three to four feet of standing water in the basement on more than one occasion.–photo by David Pugh

“Smelly House” may be smelly no more.

Safeguard Properties, a “mortgage field services” company based in Cleveland, is now in charge of cleanup and repair of the house at 210 Wilson Street.

The Federal National Mortgage Association (FMNA), or Fannie Mae, owns the house, but Huntington Bank, Columbus, is responsible for the upkeep.

Neighbors have complained about an odor coming from the house for months, attributed to three to four feet of standing water in the basement.

When asked about the house, Maureen M. Brown, public relations manager for Huntington, said in an email, “FNMA owns the house, and we have been and are continuing to address the issues.”

On Tuesday, May 11, Diane Fusco, a spokesman for Safeguard, said cleanup and repairs at Smelly House are underway.

“Huntington Bank has made it very clear to us they want to be good neighbors in the community,” Fusco said.

“They have instructed us to address all property issues as quickly as possible,” she said.

Additionally, Fusco said Safeguard has been in contact with the Village of Archbold and the Fulton County Health Department.

Fusco said she didn’t know when Huntington had retained Safeguard.

The saga of “Smelly House” began prior to 2007, when the last residents apparently abandoned the property.

Neighbors complained about the odor from the house, but Grime said as zoning inspector, she only deals with problems on the outside of the structure.

In an interview last week, Hernandez said during that first inspection, he found the house “less dilapidated than now.”

•Three to four feet of water standing in the basement;

•A smell coming through the basement window, which was unsecured;

•Windows steamed over from the inside, attributed to moisture in the basement;

•Mold on the walls, visible through the windows;

Hernandez issued health orders to Fannie Mae, the property owner, but the orders were forwarded to an official at Huntington Bank. Hernandez said the official “is very difficult to reach.”

The next action came in November 2009, when the health department was informed by the Huntington offi cial that the bank had filed an insurance claim for damage to the home. The claim was denied.

The bank was to have a contractor go to the residence and evaluate the home.

That month, a contractor did arrive. Hernandez said the contractor pumped out the basement, and changed the locks on the doors.

Within a week, the basement was flooded again.

Hernandez said he made periodic checks at 210 Wilson, and observed no action.

Also, he saw more mold in the house

A third public health order in connection with the house was issued on April 23 to Huntington Bank. A copy of the letter was reviewed during the Monday, May 3, Archbold Village Council meeting.

Hernandez said he received word from the Huntington Bank official on Tuesday, May 4, saying the basement would be pumped out again.

An electrical inspection would be done, and Toledo Edison had been contacted about restoring electricity to the house.

A reporter from this newspaper drove to 210 Wilson Street on the night of May 3. With his car parked in the street in front of the house, he could smell the odor.

The reporter did not detect an odor during a Friday, May 7 visit.

A walk around the house revealed the electrical service (weatherhead, conduit, electric meter) appeared new, and there was an inspection sticker on the meter box dated April 28, 2010.

But the meter was not spinning, indicating no electricity was being used, or electrical service had not been restored.

A visit to the local branch of Huntington Bank produced the name of a second contact. A call to the person was not returned.

Kim Cupp, environmental health director for the Health Department, said a representative of Safeguard contacted the health department, Monday, May 10.

She said the company was made aware of the violations of the public health order.

The order calls for a May 24 deadline to remedy all of the problems, including the mold in the house.

Cupp said if problems are not resolved, the next step would be an administrative conference.

During such a conference, Cupp said, Health Department officials and the property owner develop a timetable for abating the problem.

However, Cupp said Fulton County does not have a nuisance abatement fund to tackle problems like “Smelly House,” and the Health Department has no desire to take ownership of the home.

When asked if there were other homes in the county in a similar state, Cupp said while several homes are vacant as a result of foreclosure, she could only think of one other that was as bad as 210 Wilson Street.

Grime said she was not aware of any other house in Archbold that was as bad as “Smelly House.”

“This, I think, is the longest time a house that has been foreclosed has sat empty. It was listed with a real estate agent last year,” Grime said.

“We’ve been fortunate. A lot of our foreclosures have been bought out, fixed up, and rented or sold.

“There are houses (being sold). We have industrious people who are willing to buy and remodel them,” she said.

She said earlier this year, one other property owner was notified that his property needed repair.

“If we find them (houses allowed to deteriorate), we’ll get on (property owners) to keep (the houses) looking nice,” she said.