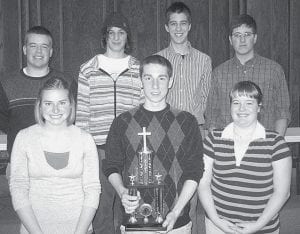 For 40 years, area Bible quiz has been a fun, family activity. Younger children grow up watching older youth, often their siblings, study the scriptures and compete at meets.

This year nearly half of the 73 participants have a sibling quizzing with them. Four churches have participated nearly every year since 1969: Central, Lockport, North Clinton and West Clinton Mennonite.

Quizzers from many other churches and denominations have participated in Bible Quiz throughout the years. St. John’s, after a hiatus, rejoined the quizzing program four years ago.

On Sunday, Feb. 22, it was their quizzing friends who cheered as Descendants of Abe, from St John’s, received the day’s top-scoring traveling trophy, averaging 140 points per match. Members are Jacob Gobrogge, Morgan Ducey, Ryan and Amy Christman, Chris and Tyler Jennings, Brandon and Colin Lehman.

With many close matches in the two round-robin divisions, Journey, North Clinton, was the only other team to win all their matches. They had the fourth highest average score of 108. Members: Lorenzo McKeever, Perry Andre, Nathan McClarren, and Chris Schroeder.