Sixteen Letterwinners Back For Archbold Wrestling 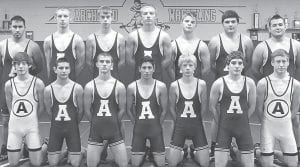 After a successful 2011- 12 campaign, the Archbold wrestling team, under Brian Becher, head coach, looks to 16 returnees for leadership.

The Streaks finished with a 36-8 record last year, claimed sectional and district titles, and were dual meet state runners-up.

“There are some boys at Archbold not playing basketball that could help our team, but have chosen to not wrestle.

“Some are under the false impression that with a lack of experience that they cannot be successful; some have a false impression that simply lifting weights will make them a better football player; and some simply are not willing to make all the necessary sacrifices of such a demanding sport.

“We have three returning state qualifiers and three other guys that have wrestled at the district tournament. We expect them to provide great leadership and the other guys to follow.

“We have a great freshman class.

“We have guys on our team that expect to win because of the amount of work they have put in since the end of last season, and with that attitude they will be winning matches in Columbus.”

As far as the Northwest Ohio Athletic League looks, Becher said that Wauseon returns a great team for dual meets. Delta also looks to play a mix into the league race.

“Delta has three returning state qualifiers and one of the best freshmen in Ohio,” he said.

“I expect Delta to finish in the top three at the state meet.

“Bryan has a returning state placer, and I expect that they will ride their football success into the wrestling season.”