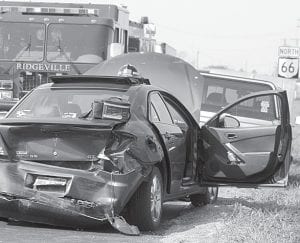 A car load of teenagers is sandwiched between two pickup trucks in a three-vehicle accident that sent six 16-year-olds to three area hospitals. Ridgeville, Archbold, and Napoleon rescue squads responded to the crash on St. Rt. 66, which occurred about 3:16 pm, Friday, Aug. 24. All crash victims were treated and released.– photo by David Pugh

All were treated and released.

A mini-pickup truck, driven by Maranda J. Steffes, Bryan, with passenger Kristen L. Walsh, Edgerton, was traveling north on the highway, and was stopped to make a left turn to go west on Henry Co. Rd. U.

A car, driven by McKenzie J. Hall, Defiance, with passenger Courtney J. Rocha, Archbold, was stopped behind the mini-pickup.

Center, and Travis Jaramillo, rural Fayette, was traveling north behind the Hall car.

The Henry County Sheriff Department report on the crash states the Davis pickup collided with the rear of Hall’s car, which was, in turn, pushed into the back of Steffes’ mini-pickup.

Walsh was not injured.

Henry County deputies did not issue a citation.