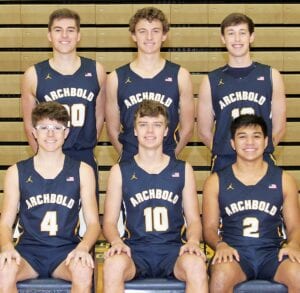 Six letterwinners return for Joe Frank, AHS head boys basketball coach who is starting his third year at the helm.

The Streaks finished 18-7 last year, and were second, behind Evergreen, in the Northwest Ohio Athletic League. They also lost to the Vikings in the Division III district final.

Frank lists his six returning letterwinners among the team’s strengths, along with overall team speed/quickness, seniors who lead by example, and that the team is a “hardworking group that is eager to prove itself on the floor.”

“Identifying and playing roles could be an issue with not having an off-season and competing with other schools,” Frank said.

Other weaknesses Frank identified is that the boys need to develop “a mindset, as well as physical conditioning, that is required to play a faster pace this year, and scoring, especially when we are forced to run half-court offense/sets.

“Our first priority, as is always the case, is going to be on the defensive end. We are still emphasizing defense, even though we may give some shots up that we normally wouldn’……………….t see our opponents take.

“We are going to try and play at a faster pace this year to take advantage of our quickness and hopefully, our depth.

“There may be a few bumps in the road as we adapt to this new style of play, but we are committed to playing faster and having more possessions in each game.

“Our schedule, as usual, is going to be a difficult one.

“The NWOAL should again be very competitive. Several teams have key returnees, and it will be interesting to see how the NWOAL unfolds.

“Our goal, as always, is to be playing our best basketball at tourney time and to advance as far as we possibly can.”

Due to Covid concerns, the season opener with Wauseon originally scheduled for Saturday, Nov. 28, has been postponed until Thursday, Dec. 17, at AHS.