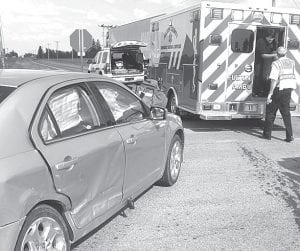 Top: Archbold Rescue prepares to transport a victim of a twocar accident at the intersection of Co. Rds. 19 and C, Wednesday afternoon, May 29. All four persons involved in the crash were treated and released. Above; Fulton County sheriff deputies walk past the wreckage of one of two vehicles involved in a Friday, May 31 crash at the intersection of Co. Rds. F and 20. Two persons were injured; one was transferred to a Toledo hospital.– photos by David Pugh

Charlotte Rosebrock, 80, Archbold, was taken to the Fulton County Health Center, then transferred to another hospital in the Toledo area, following a two-vehicle crash that occurred about 9:47 am, Friday, May 31.

Rosebrock was driving an SUV west on Co. Rd. F, while Nancy Allan, 56, rural Fayette, was driving a minivan north on Co. Rd. 20. Allan was taken to FCHC, where she was treated and released.

The Fulton County Sheriff Department report states the Rosebrock vehicle failed to stop for the stop sign, and collided with the minivan.

The minivan then struck a utility pole, snapping it off near ground level, and a telephone junction box before overturning and coming to rest in the front lawn of a home on the northwest corner of the intersection.

The SUV went off the same corner, stopping just before striking the home.

Deputies have not completed the report on the crash. No citations have been issued. 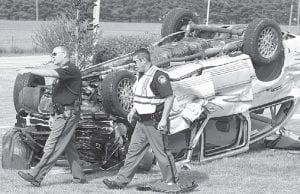 Archbold and Wauseon rescue squads teamed up to transport four persons from a two-car crash that occurred at the intersection of Co. Rds. C and 19 about 5:09 pm, Wednesday, May 29.

All victims were treated and released at FCHC.

The Ohio State Highway Patrol report said the Fry vehicle stopped at the stop sign at the intersection of Co. Rds. 19 and C, then continued north. The Lynn vehicle failed to stop for the stop sign on Co. Rd. C, and the two cars collided.

OSHP troopers cited Daryl Lynn for failure to yield at a through highway.