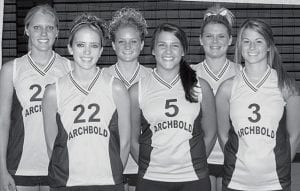 The Streaks finished last year with a 16-9 overall record and were second in the Northwest Ohio Athletic League at 6-2.

While the Archbold mentor points out it will be tough replacing veterans from last year’s squad, she is looking for this year’s seniors to step it up.

Frank missed most of the 2006 season due to injury.

“Replacing those three seniors will take some time, but we’re looking forward to seeing this year’s seniors step up and give us a good core to build around,” said Nofziger.

“We are undecided about a few positions yet, but I think that could be a good thing, because it means we could have some great depth this year. We hope to have a little quicker offense, and our setters will play a big role in that.”

As far as the league outlook, Nofziger looks for Evergreen, Wauseon and Liberty Center to battle for the top spots. She also hopes her squad is right in the mix for the title. She said Montpelier and Patrick Henry were coming on at the end of last year and may surprise some people.

“We lack height this year, so we are concerned about the first line of defense, our blocker,” said Nofziger. “It will be important to have a quick defense, and we’re not there yet.

“We hope to have a better league showing. The kids were disappointed to finish where we did last year, and are working hard to improve on that record.

“We’re excited about the upcoming season. The kids have worked hard this summer to improve on their individual skills.

“As a team, it may take a few matches to gel together, because we’re really experimenting with a lot of different positions, and our sophomores have a lot to learn, as they are playing key positions.

“The kids have set some high goals this year and want to improve on last year’s record.”