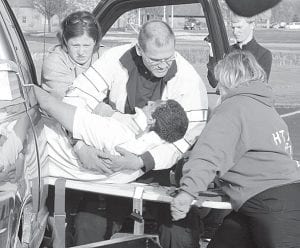 While it has the look of a car accident, this scene was part of a simulation conducted by the Four County Career Center working with Northwest State Community College. It was held in an FCCC parking lot, Thursday, March 29. After volunteer victims adorned with stage-prop wounds were pulled from the wreckage, they were taken to the NSCC nursing lab, which was called “Northwest Community Hospital” for the event. The victim, Aaron Brown, a student in the NSCC Law Enforcement & Security Tactics class, is pulled from the wreckage by Crystal Aeschliman, Bryan Tonneas, and Cindy Zachrich, from left. The three are paramedic students in the FCCC adult workforce public safety division.– photo by David Pugh