Short Goes To Border To Witness Treatment Of Migrants 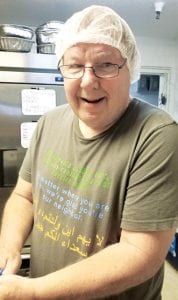 Marlin Short, Wauseon and originally from Pettisville, decided part of his retirement celebration would include traveling to the Texas Mexico border to witness the treatment of migrants by the U.S. government.

“I was going to retire from Sauder’s and go to the border in May, but I was diagnosed with Parkinson’s,” he said.

Short retired a bit earlier than planned, and his trip to the border went off as scheduled, May 6-10.

Twenty-one people were in his group, including Wanda (Lantz) Stopher, AHS ‘77 and the daughter of Marvin and Sharon Lantz.

“She and I were the only two who weren’t from Kansas,” Short said.

The MCC Borderlands Learning Tour of the South Texas border area “focused on education related to a range of matters surrounding immigration, the U.S.- Mexico border, and the immigrant experience on both sides of the border,” the MCC.org website states.

“We went down to McAllen, Texas. They have no murders there. It’s a very wealthy area,” Short said.

“I had a king-size room, breakfast every morning, and about a mile away, there are all these poor people.”

Short’s experiences ranged from making sandwiches for detainees– people captured crossing the border– to viewing the wall from the U.S. and Mexican sides.

“A lot of people think the wall is a new thing, but it actually came in (in the McAllen area) under (President George W.) Bush after 9-11,” Short said.

They also went to court as observers.

“These migrants were in court because their families are split up,” Short said.

Another was a father trying to get to his wife and three kids. The last was an eightmonths pregnant woman.

“They didn’t get to see their kids. They got sent back,” Short said.

“The thing that got me was when we went to the Catholic Relief Center in McAllen, where they dropped off all these immigrants,” he said.

“There are two nuns that run that place, and they feed thousands.

“I was thinking about Jesus and the little boy who fed 5,000 with the loaves and fishes. These two nuns are amazing! I think it’s heroic, what those two nuns are doing down there.

“Because I have Parkinson’s, they put me in the kitchen. This one nun grabbed me. They wanted somebody tall. They had me empty cereal boxes and stack the cereal up on top.”

Short, who has some difficulty walking, said, “The neatest thing from my trip was when I was walking out to the dumpster carrying my boxes, and this little boy saw me.

“He calls the leader over and asks, ‘What’s the matter with him? Does he need help?’ He was more concerned about me than about himself.”

While working in the kitchen, “I had to make sandwiches with four Methodist ministers. It was all women and me. I about got fired there because I wasn’t fast enough,” he said.

“We made about 1,000 sandwiches with cheese and ham.

“There were about 100 kids and families lined up that came from Guatemala that day. The border patrol would drop them off.

“The nuns would feed them in the morning, or the immigrants would stay overnight. There are mats there and about 100 portable johns.

Short stated that mainline churches like Methodists, Catholics, Lutherans, Presbyterians, and Mennonites are carrying much of the load as far as feeding the people.

The general feeling in McAllen is that the government is overburdening the charitable organizations, he said.

“I think we’d have a crisis at the border if it wouldn’t be for the churches,” Short said.

“Most of these people who are coming are families– mothers and fathers with their kids. They’re coming with nothing but the clothes they’re wearing, and if they don’t have someone who can sponsor them, they’re stuck.

“The sign at the border says, ‘Welcome to the United States’ but I don’t think we’re being very welcoming!”