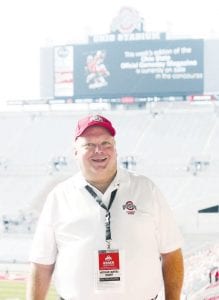 Artie Short, an Archbold resident and Ohio State University graduate, stands in “The Horseshoe,” the football stadium where the Buckeyes play. He is in his first season as an usher for the games.– photo by Scott Schultz

Artie Short, an Archbold resident and Ohio State University graduate, is fulfilling a dream that reaps benefits that others don’t often have the chance to get.

Short is an usher in section 9B of “The Horseshoe” for the 2012 OSU football season.

By the way, section 9B has a great view of the game, not to mention it’s under C-Deck should inclement weather move in, keeping Short and his fellow ushers and fans dry and out of the weather.

It’s not about just watching the game; it’s getting spectators safely to their seats and if need be, helping in an evacuation.

With just three games completed, Charles Knapp, Short’s section portal chief with 22 years of experience, said, “You never know what type of person you will get to work with, but it’s like I have known Artie all my life.”

Short also works with James Corbitt, another 22- year veteran. Both are 77 years old.

“I am the youngster here, but these two have been kind enough to take me under their wing,” said Short.

Short is required not only to stay until the stadium is empty, but to be at the sta- dium three hours before kickoff. It’s a long day.

“It used to be that ushers could leave in the third quarter, but this year we have to stay until the stadium is empty,” he said.

Short is compensated: ushers are issued a $4 voucher for food, but it can only be used if Short agrees to buy something that costs at least $10 before the game.

Dream Of Being An Usher

Short hadn’t really thought about being an usher at his alma mater, but he ran across an application online.

He printed it and left it sitting around his home.

Dan Yoder, another Archbold resident who ushers at the stadium, ran into Artie’s wife Kathy and mentioned to her about Short completing his application.

Yoder was traveling to OSU and told Short he would take his application to the head usher.

“I don’t know if there was anything preferential in Dan taking my application, but it felt good knowing that my application arrived at the right desk,” said Short.

“There was no cash involved with Dan taking the application down, but I may owe him a bologna sandwich at Waldo.”

Waldo, Ohio, is a town on US 23 north of Columbus with a restaurant known for its fried bologna sandwich.

When asked about the benefits of being an usher, Short said, “I like to think I am giving back to the university from which I got my degree.

“But the real benefit is getting into all home games and not paying 70 to 80 bucks a ticket!”

Other benefits include Short’s “sporty” shirt and cap for the game along with a jacket that cost Short only $67.

With a total of six-plus hours on the road, the three to four hours of game time may seem like an extremely long day.

But Short points out that his son, Jay, is a junior at OSU. Father and son always take time to see each other before and after the game.

“It is always very nice to see Jay, and with this year’s game against Nebraska (being) an 8 o’clock game, I may even find myself bumming a couch off of him,” said Short.

Beaming from ear to ear, Short said while Dan Yoder was on the list for seven years before he finally got an ushers job, his wait was from last year’s football season to the start of this year’s season.

When asked if he had a lucky star, Short attributed his luck to “clean living.”