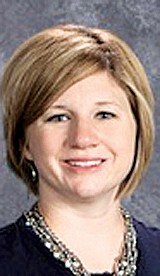 Whitney Short, PHS ‘02, has been named National Agriscience Teacher of the Year for 2017, the second year in a row for someone with a connection to Pettisville to be recognized.

The award, presented by the National Association of Agricultural Educators, was presented to John Poulson, teacher and FFA advisor, for 2016.

“I was really surprised Mr. Poulson asked if he could nominate me… it was a huge deal,” Short said.

“The fact that he thought I was the caliber of teacher that would deserve this is pretty intimidating. At first, I told him I wasn’t worthy.

The ag program there is a satellite of the Penta Career Center.

A press release from the NAAE said Short realized enrollment in her program was declining.

She renewed student interest by creating an agriculture biotechnology pathway. Through the new course of study, students can explore biotechnology in animal and plant systems.

The popularity of the new pathway has resulted in an increase in science-based agriculture classes offered at Anthony Wayne.

Part of the program at Anthony Wayne is project-based learning. One project is the Chicken Challenge, in which students conduct an experiment to evaluate a broiler chicken’s rate of weight gain using a variety of feeds.

Students care for the chickens until butchering at a processing facility and can participate in the butchering process.

These kinds of experiences help Short’s students prepare for college and careers.

The National Agriscience Teacher of the Year title is awarded to six people each year, one from each of the six NAAE regions across the United States.

“When I went to college, I went for animal sciences. I thought I wanted to be a vet (veterinarian).

“And I realized pretty quick I probably wouldn’t want to go on to vet school.”

She graduated from OSU with a bachelor’s degree in agriculture education and animal sciences.

She earned a master’s degree in agriculture education in 2009 from OSU.

Active in FFA both at PHS and OSU, Short was a state FFA officer while in college.

“That’s when I realized how much I really enjoyed the classroom. So I did a double major, then I student taught at Wauseon,” she said.

After receiving her master’s degree, “My first job was Anthony Wayne. I started here in 2009, and have been here ever since,” she said.

After winning a state award, Short said she had to fill out “a pretty extensive application” for the national award.

“I know we’re doing good things for our students here, but I guess I was really surprised and really honored that my profession would think that what I’m doing is really good,” she said.

“I started teaching, and there couldn’t be a better profession for me, honestly.”