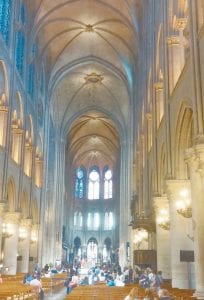 The interior of the Notre Dame Cathedral in Paris, photographed by Nanette Buehrer, an Archbold native and North Carolina resident who visited Paris in 2015. The building caught fire, Monday, April 15. The wooden roof structure, hundreds of years old, was destroyed.– courtesy photo

Shock and sadness were the two primary emotions people expressed when they learned of the fire that ravaged Notre Dame Cathedral in Paris, Monday, April 15.

Nanette Buehrer, an Archbold native who visited Notre Dame in 2015, said she felt “such sorrow for the people of France, and the world.”

Marianne Francis, Waldron, Mich., a parishioner at St. Peter Catholic Church, Archbold, said when she got the news, “I cried. Absolutely cried.”

Jaimee Laurent, information technology manager for the Haulotte Group, the comwww. pany that owns Bil-Jax, said she was shocked when she got the news.

Laurent is from Lyon, France, about 288 miles from Paris. She is one of several people from France who work at the Archbold facility.

Laurent said she had visited the cathedral twice.

Before the fire, the cathedral was “impressive. I mean, it’s really a great piece of the history of France. When you step in, it’s amazingly beautiful.”

Francis, who operates a business arranging pilgrimages for Catholics, talked about the works of art at Notre Dame “and the rose window, of course, and then there’s the (bell) towers and the steeple. 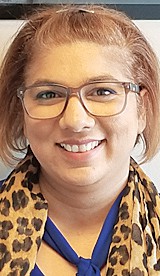 “It’s an important piece of architecture from the Gothic period, and it’s, it just was, a beautiful place.”

In an email to this newspa- per, Buehrer, who now lives in North Carolina, said the cathedral, “has been an international iconic symbol of the Christian faith for hundreds of years.

“Feeling humbled to have had the privilege to walk inside and feel hundreds of years of history surround me, to be in awe of the magnificent architecture, art, and stained glass.

“Even with all the tourists milling around, there was a reverence that hushed the crowds as we took in the religious symbolism.”

Laurent agreed with Buehrer’s use of the word ‘reverence,’ adding, “It’s a very peaceful place.” 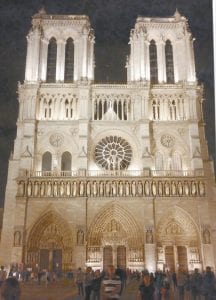 Nanette Buehrer took this photo of the Notre Dame Cathedral. She traveled to Paris in 2015. In fighting the Monday April 15 fire, Parisian firefighters were able to save the stone facade of the 800-plus-year-old structure.– courtesy photo

Laurent described one of the features of Notre Dame: a small, circular stone set into the ground outside the front entrance. It is known as “point zero.” All distances in France are measured from point zero, she said.

“Kings have been crowned there– bishops, archbishops. Some are buried there,” he said.

The church was vandalized during the French Revolution, Laurent said. Stanbery noted it had survived World Wars I and II.

Laurent said when people think about France, they think “mostly of the Eiffel Tower and Notre Dame.”

“It’s one of the biggest symbols of France, and it’s just being blown away,” she said.

Laurent said she first got the news about the fire around 2 pm from a friend in France via a social media group. It was 8 pm in France. 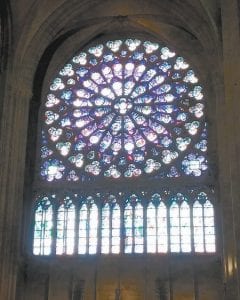 A stained glass window in the Notre Dame Cathedral, in a photo taken by Nanette Buehrer.– courtesy photo

Among her French coworkers, “the first feeling we had was shock, but also very sad. And we were… trying to follow the evolution, I mean, the progress of the fire.”

She said the second shock was when the cathedral spire, 93 meters (about 305 feet) tall, fell.

“Shock, and then sadness,” she said.

Emmanuel Macron, president of France, announced even before the fire was fully extinguished that Notre Dame would be rebuilt.

Laurent has no doubt that will happen.

“They’ve already had €600 million (Euros, about $677 million) in donations from all across the world to rebuild it. They said for now, they have saved the most valuable masterpieces inside,” she said.

“It’s going to cost a lot of money and take time, but I don’t doubt it’s going to be up again. One day.” 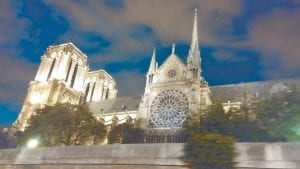 Notre Dame Cathedral, photographed by Nanette Buehrer, from the river Seine, which runs through Paris. The fire destroyed the wooden spire, center, and the roof structure.– courtesy photo