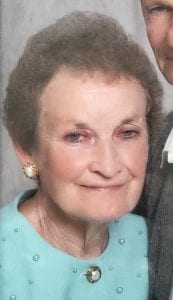 Shirley L. Hayes, age 81, of Archbold, passed away on Friday, Jan. 5, 2018, at CHP–Defiance Area Inpatient Hospice.
Prior to her retirement she had worked as a nurses aide at Fairlawn Haven in Archbold, had been a baker for The Doughbox Bakery in Archbold, and for many years had done housecleaning for many people.
Shirley was born in Bryan, Ohio on March 17, 1936, the daughter of Donald and Ethel (White) Luke.
On Oct. 15, 1960, she married Rollin E. Hayes, and he preceded her in death in 2016.
She was a member of Cornerstone Church in Toledo.
Shirley and Rollin enjoyed traveling, having visited all 50 states, but she liked traveling by car mostly because she enjoyed the journey.
She was an avid bicycle rider, walker, loved to play cards, dance, play piano, garage sales, visiting shut-ins, was very loyal to all of her friends, and her favorite hobby was oil painting. Most of all, she loved Jesus.
Shirley is survived by daughter, Mitzi (John) Bailey of Bryan; three sons, Toby Hayes of Bowling Green, Nick Hayes of Archbold, Bari Hayes of Archbold; three grandchildren, Shayla, Cassie and Jove; one sister, Josephine (Marlin) Missler of Bryan; one sister-in-law, Ruth (Wayne) Rupp of Pettisville; and three brothers-in-law, Doyle (Marlene) Hayes of Philadelphia, Pa., Lyle (Shirley) Hayes of Lincoln, Neb., and Duane (Linda) Hayes of Angola, Ind.
She was preceded in death by her husband, parents, and sister, Donelda Luke.
Visitation for Shirley will be held from 2 p.m. until 4 p.m. and 6 p.m. until 8 p.m. on Tuesday, Jan. 9, 2018, at the Grisier Funeral Home in Archbold. Funeral services will be held at 11 a.m., Wednesday, in the Fireside Room at Archbold Evangelical Church, with Pastor Roger Andrews, officiating. Interment will precede the service at the Shiffler Cemetery, near Bryan.
The family requests that memorial contributions be given to the Alzheimer’s Foundation or CHP–Defiance Area Inpatient Hospice.
Online condolences may be offered to the family at www.grisierfh.com. -Posted 1.7, 3:40 pm