Sheriff: No Calls From Supreme Court To Free Noah Pelmear 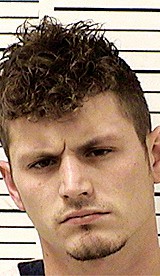 Noah Wayne Pelmear, the 27-year-old Archbold man who was freed from the Corrections Center of Northwest Ohio by an Ohio Supreme Court order, is waiting for the highest court in the state to make a decision.

Pelmear is appealing his convictions on driving while license suspended charges to the Supreme Court.

He alleges that the Western District Court has no jurisdiction over him because his father, Douglas Alan Pelmear, is a diplomat, a special minister of the Cherokee Nation of Indians- Aniyvwiya Nation.

Pelmear was arrested and jailed on Friday, Dec. 22, based on a sentence on two charges handed down in Fulton County Common Pleas Court.

The first case was filed against him in Fulton County Western District court on May 31, 2016, based on a May 27 incident.

In that case, he was charged with violation of Ohio Revised Code 4510.14, which is titled, “Driving under OVI (operating a vehicle while intoxicated) suspension.”

The second case was filed against N. Pelmear on July 11, 2016, based on an incident two days earlier.

In that case, he was charged with violation of Ohio Revised Code 4510.11, which is titled “Driving under suspension or in violation of license restriction.”

The two cases were com- bined into one, and in October 2016, N. Pelmear was sentenced to 10 days in jail.

He appealed the matter to the Sixth District Court of Appeals, which, on Oct. 20, 2017, decided against him.

With the appellate court decision filed, Kent North, a Williams County judge who was hearing the N. Pelmear case by assignment, held a hearing on Friday, Dec. 22, and ordered N. Pelmear arrested and taken to CCNO to begin serving a 10-day jail sentence.

An appeal of the Sixth District decision was filed with the Ohio Supreme Court on Monday, Dec. 4.

The Supreme Court issued a temporary stay of judgment on Friday, Dec. 22.

But N. Pelmear stayed at CCNO until Tuesday, Dec. 26, when Heather Lumbrezer, clerk of the Western District Court, called the offices of the Ohio Supreme Court and was advised of the stay.

D. Pelmear alleges that Roy Miller, Fulton County sheriff, was contacted by a representative of the Supreme Court, and was advised of the temporary stay.

“I talked to him (Miller) about 4:30 (pm) on Dec. 22, and he said he had taken two phone calls from the Supreme Court, and one from the FBI, and to have my friends stop making fraudulent calls,” D. Pelmear said.

“He told me it’s just a traffic violation, that he should serve his sentence.

“But a stay is a stay. The laws are in place for everyone.”

In an email message to this newspaper, Miller said, “I did not get a phone call to release Noah. His release would be through the court anyway, not through me.

“I did not receive any calls, so (I) did not dismiss them as pranks.”

Miller added, “All said, I am not sure how this got to (the) Supreme Court in hours after 1 pm, but it did and that’s something other officials are wondering also, especially on (the) Friday before Christmas.

“Try getting something done that fast.

“Noah is out for the time being until we get word from the Supreme Court.”

Ann Yeager, manager of the office of public information for the Ohio Supreme Court, confirmed the temporary stay of judgment.

On the “United Cherokee Nation of Indians- Aniyvwiya” website frequently asked questions, the organization states if a person does not know the percentage of Cherokee blood, or does not know the name of Cherokee ancestors, the person can “make an affidavit stating what your belief is as to your relationship to Cherokee. We will accept it… send (the affidavit) along with application.”

Also under the FAQs, the organization states if a person does not have Cherokee blood, but still wants to be a member of the United Cherokee Nation of Indians, “adoption is a possibility. It is considered on a case-bycase basis.”

The FAQs also explain that the United Cherokee Nation is not federalized (recognized by the federal government), and those belonging to the group do not have rights that fall under the Federal Native American Rights.

“We will not reduce our sovereignty to the nonsense of the federal government for any reason… The act of federalization removes a tribe’s right of self-determination.”– David Pugh