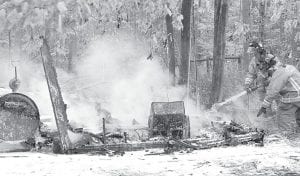 Archbold firefighters extinguish hot spots after a fire destroyed an 8×12 storage shed, Sunday, Oct. 10, at the Bruce Lauber residence, 5450 Co. Rd. 26. Russ Wyse, assistant fire chief, said AFD was called to the scene at 6:17 pm. He said it is believed an ember from a stump being burned caused the fire. Firefighters were concerned about a fuel storage tank, seen at far left, which contained gasoline. Wyse said the gas was being vented out of the tank, and was burning, but did not explode. Firefighters used water to cool the tank, and foam to put out the gasoline fire.– photo by Mary Huber