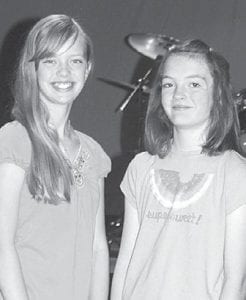 Jensi Shaw and Madeleine Wixom, students at Pettisville Elementary School, sang with the Toledo Opera in the performance of “Turandot,” Friday, May 11.

“It was fun,” Wixom, a fifth grader, said of the experience.

The two were part of a 16- member children’s chorus that sang on the stage at the Toledo Museum of Art Peristyle.

Being on the Peristyle stage “was really cool. We could look out and see a whole bunch of people sitting all over,” Wixom said.

Shaw, a sixth-grader, said if they were singing in a “real, real opera,” they would be performing off stage, “but they wanted us to have that experience.”

They didn’t have a lot of opportunity to gaze out from the stage because they had to keep their eyes on director Stefan Sanderling.

At the end of the show, while they were taking their bows, they did have a chance to survey the crowd.

Wixom said they only nodded to the audience.

“We didn’t know exactly what to do,” Shaw said.

The girls said they picked up some Italian words, but mostly, they just made the sounds.

“A lot of the words sound like what they really mean,” Shaw said.

Originally, the children’s chorus were to sing four songs, but one was cut. Two songs were performed on stage. One was done from a stairway.

Wixom said during the first couple weeks of practice, the songs were hard.

“We hadn’t learned them yet,” Shaw said.

“The last one was difficult. The first ones were easy,” Wixom said.

Shaw said the last song was hard “because it was kind of a mix-up. It had different beats, and we didn’t spend as much time practicing it.”

The girls said Duane Beck, a music teacher at Pettisville, recruited them for the opera.

They traveled to the museum every Wednesday night for several weeks for an hour of practice, from 7 to 8 pm.

“Wednesdays were some late nights,” Shaw said. “We car-pooled a lot.”

On the last night of practice, they were taken onto the Peristyle stage.

Most of the other children in the chorus were from the Toledo area.

In fact, the other people in the chorus were surprised people from as far away as Pettisville participated.

The girls said while they didn’t know the meaning of the words in Italian, they were able to figure out what was going on.

Later, just before the performance, the superscript, a sign that hangs above the stage and translates Italian into English, was installed.

In “Turandot,” which is set in China, Wixom said there is a princess, Turandot, who does not like men “because her sister died because her husband killed her.”

“That’s in the play, not real life,” Shaw said.

Turandot decrees that any man who wants to marry her must answer three riddles.

“If they get any wrong, they get their heads chopped off,” Wixom said.

Then a prince arrives and correctly answers all three riddles, but he says the princess does not have to marry the prince if she can guess his name.

Enter the slave girl, played by Jennifer Cresswell, a soprano, who directed the children’s group.

As she is being tortured for the name, she grabs a guard’s dagger and stabs herself.

Shaw said some people thought the show “was pretty violent.”

She said later in the show, the prince declares his loyalty to Turnadot by telling her his name.

Shaw said the prince “kind of forces himself on her and kisses her. Then she falls in love with him.”

Wixom said she was able to take away a lesson from the show, and that was forgiveness.

“She hated all men because one man killed her sister,” but she did forgive the prince, Wixom said.

Wixom said she agreed to be in the opera because it might be fun.

And, she said, it was. She would like to be in more children’s choruses for the Toledo Opera.

Shaw said she likes acting in stage plays or musicals, but she really didn’t have a big enough part to say opera isn’t similar to musicals.