Share A Mile Bus Service Owes Its Orgin To Teeth 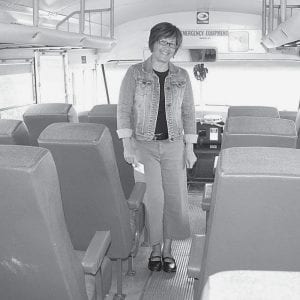 Stopher said a study of health care access found that access to dental care for low-income persons was difficult. Since bad dental health can lead to other issues, it’s a serious problem, she said.

The Northwest Ohio Dental Clinic in Napoleon sees patients on a sliding fee scale. But one of the problems they found was those who need the service often don’t have reliable transportation to get there, so the Share A Smile service was started in April 2007 to transport people to the clinic.

Soon, those behind Share A Smile realized the same persons they were serving were having trouble making it to other appointments.

"As we started building relationships, we saw people walking to Pamida (a local discount store) where there is no sidewalk. Sometimes, they would walk on the road," she said.

On June 17, a group met and began to dream about what could be done, she said.

Share-A-Mile started with what they had on hand; in this case, Central’s older 33-passenger school-bus based bus.

The bus was looked over, and it was decided that for now, it would do, although Stopher admits it’s not the most fuel-effi- cient or environmentally-sensitive vehicle.

"One of our dreams is not to take the big bus. We’re not sure where we’re going to go. A handicapped bus- that would be easier for people to board," she said.

An airport shuttle bus would be just about ideal, she said.

Without much fanfare, Share A Mile started running its routes on Tuesdays and Saturdays in September.

If someone at Pettisville calls ahead, the SAM bus will pick up at the Post Office parking lot. Otherwise, routes start at the church, stop at the Arch Motel, East Gardens, and two places in the Fairlawn complex, plus other stops throughout the village.

The bus goes south to the FISH food pantry, Archbold SuperValu Foods, and Pamida, before making the return trip.

Other supports are not being sought now, "but as we look into the future, we would like to welcome the community to join us," she said.

There is a suggested donation of $1 to ride SAM, "but that shouldn’t keep anyone from riding. This is a ministry of the church, providing a service to the community," she said.

There currently are eight or nine drivers from Central Mennonite who expressed an interest in the program and have bus endorsements on their driver licenses.

"Safety is a big concern," she said.

Stopher said there are several reasons to ride the SAM bus. Some ride out of economic necessity; for others, driving may be physically difficult.

Some see the bus as a more environmentally-sensitive option than driving a personal vehicle.

Another reason to ride the bus is fun.

"It’s surprising how much fun we’ve had. We’ve had a delightful interchange between people as we ride," she said.