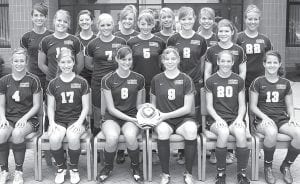 With the addition of Liberty Center, “
This is the first year that the NWOAL has a true league, with six teams competing in varsity soccer,” said Kidder.

“We should be a strong contender for league honors, although the NWOAL has many strong teams this year.”

Kidder, who is in his sixth season at the helm of the Blue and Gold, said the team is “well-rounded and strong on both the offensive and defensive sides.”

The Streaks were scheduled to open their season yesterday, Tuesday, at Springfield.