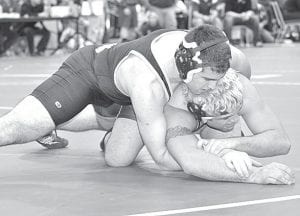 Blue Streak senior Kellen Seaman, on top, works his opponent at the Div. III district meet. Seaman finished sixth after working his way through the consolation rounds. He finished the season with a 35-29 record.– photo by Mario Gomez

Seven competed but did not advance to state.

Eli Hammersmith, a 170-pound sophomore qualifi er, wasn’t cleared to wrestle by doctors after suffering a concussion at the sectional tournament.

Damian Short (113 lbs.), a freshman, defeated Margaretta’s Tyler Rogers 5-4 in the first round but lost a 5-0 decision to Elmwood’s Dexter Lee in the quarterfinals.

Short bowed out after losing a 5-1 overtime decision to Swanton’s Jacob McCoy. He finished with a 45-11 record.

Ben Eggers (120 lbs.), a junior and a returning state qualifier, pinned Otsego’s Buddy Limes in 5:59, but lost a 5-2 decision to Seneca East’s Damien Showman to drop into the consolation rounds.

Eggers defeated Jacob Morgan of Bucyrus 4-3 before getting pinned by Cory- Rawson’s Zach Smith in 1:17 to end his season.

Logan Day (126 lbs.), a sophomore, defeated Austin Schaffer of Seneca East 7-4, then was pinned by Lakota’s Ben Timmons in 3:07 in the quarterfinals.

In the consolation round, Day was pinned by Carey’s Brayden Leist in 4:13. He finished with a 45-13 record.

Kenny Price (132 lbs.), a sophomore, also a returning state qualifier, was pinned by Woodmore’s Dexter Emch in 4:50 in the first round.

Wrestling in the consolation brackets, Price lost a 3- 0 decision to Alex Guerra of Sandusky St. Mary Central Catholic. He finished with a 48-14 record.

Stuckey won a 13-6 decision over Jacob Amburgy of New London in his first consolation match, but was pinned in 3:52 by Randall Allen of Bucyrus in the third consolation round to end his Archbold career with a 43-21 record.

In the consolation rounds, Seaman fought all the way through with a 13-2 major decision over Margaretta’s Jamison Pridemore, an 8- 1 decision over Elmwood’s Luke Garner, and a 2-1 overtime decision over Ayersville’s Devon Bergeon.

In his go-to match, Seaman was pinned by Kohl Johnson of Upper Sandusky in 1:34.

Wrestling for fifth place and the alternate spot, Seaman was pinned by Carey’s Lincoln Stanberry in 2:39 to finish sixth.

Senior Jose Hernandez (220 lbs.) was pinned in his first match in 3:51 by Nathan Davis of Cory-Rawson.

Hernandez faced Patrick Henry’s Chase Wright in the consolation round, and was pinned by the Patriot in 4:56, ending his season and career at Archbold. He finished with a 21-11 record.

“Kellen (Seaman) getting sixth was a big thing,” said Becher. “I’m sure at the beginning of the year he would have second guessed being a district placer, but he wrestled a good tournament.

“We thought Oliver (Stuckey) would have placed here. With Jose (Hernandez), being a district qualifier is good for him.

“You feel for those kids that lost the final match they will ever wrestle.”

Becher hopes the experience for his younger wrestlers will help them prepare for next season.

“Hopefully these younger kids are upset or angry with their performance,” said Becher.

“Not feeling sad and hanging their heads, but more anger that they lost the match and fuel them to want to come back here next year and get back to Columbus.”